Python is a popular high-level programming language for several years now. This high-level programming language is geared for quick application development. IT is because compared to certain other languages such as Java or C++, it provides developers with a simple syntax and code. The libraries and support make it clear that any application that supports feature-rich mobile, web, IoT, and AI apps may use them.

Python enables programmers to create real-time programs such as games, web apps, enterprise solutions, analytical and cognitive applications, image analysis and website development applications, and GUI-based desktop applications. The majority of programmers say that Python is the quickest programming language available due to its capacity to expand indefinitely aids developers in a variety of fields.

Let’s have a look at the primary Python program and python use case in numerous real-life apps:

What Are Real-Time Applications?

The development of real-time applications is a significant achievement in the modern era. Siri, Cortana, Alexa, and a slew of other virtual assistants are available for every channel. Users may simply obtain information and receive frequent updates with notifications using these practical applications and having a connection to the internet.

The quick answer is that there are millions of dedicated developers, as well as a lot of other people. According to a 2019 estimate, there are 8.2 million Python developers. According to Stack Overflow’s 2020 developer poll, Python is among the most prominent and commonly used languages. Indeed.com now has almost 100,000 available Python-related jobs since April 2021.

Of course, there are a large number of Python users who would be missed by this kind of data and polls. Python isn’t just for programmers! Mobile App Development Services in USA, academicians, data analysts, children, hobbyists, IT experts, and a wide range of other individuals utilize it. You don’t have to make a living as a Python programmer to get the benefits of studying it.

Python, on the other hand, is quite useful on a professional standard.

What Companies Use Python?

Here’s a quick rundown of a few firms that employ Python:

That is only the tip of the iceberg! In reality, Python is probably used in some capacity by the majority of large corporations these days. An excellent approach to find out is to search for company name + python on a job site like LinkedIn or Indeed. You’ll often discover that firms are seeking folks that know Python.

Also Recommended :  Go Vs. Python – Which One Is Better for AI?

What Makes Python Applications So Amazing?

Python is an enthralling programming language to learn. Businesses are increasingly realizing how much money they might make if they built their app in Python. Here are some of the things that make Python so special:-

Why Businesses Should Build Applications in Python?

Python programming is a good choice if you want to extend your application and extend its consumer base. It includes a large library of libraries that allow businesses to incorporate a lot of elements without slowing down the loading process.

Developers may obtain all the support they need thanks to the programming language’s large community. The majority of companies hire Python engineers due to the general real-time applications they can create. Python is presently the most popular programming language among programmers.

Top 12 Uses Cases & Applications of Python in the Real-World

The list of uses of Python are as follows: 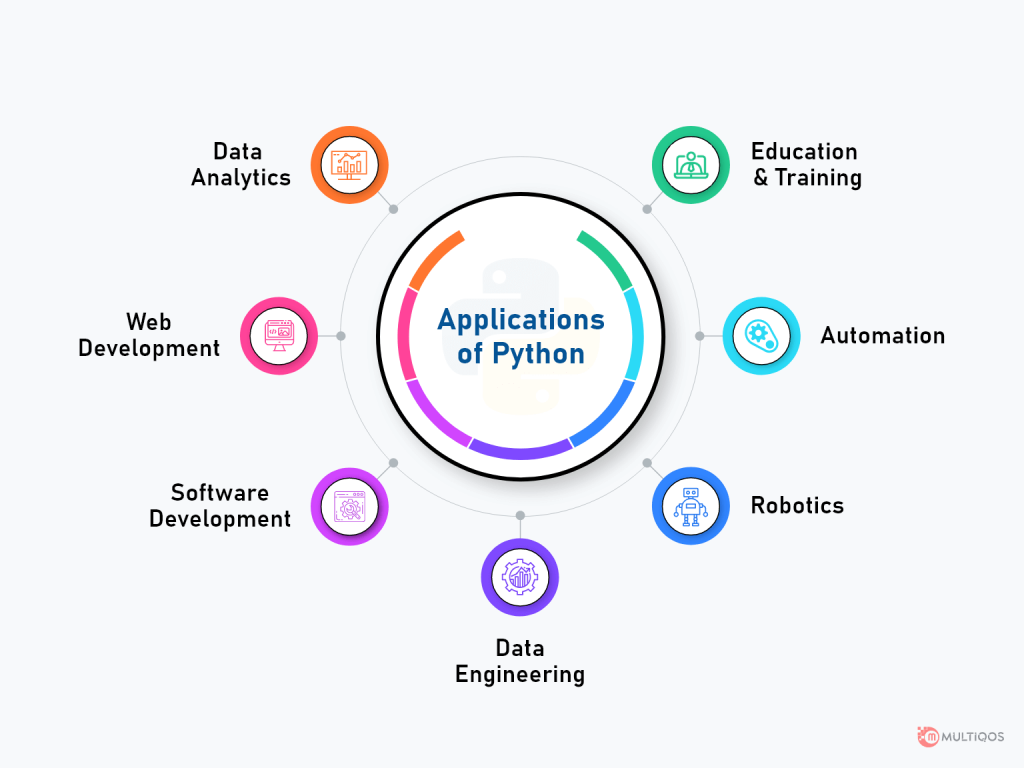 What Kinds of Issues Do Mobile App Developers Face?

When real-time apps are developed by mobile app development services, the road to development is paved with problems and stumbling blocks. Security, usability, scalability, operating efficiency, and so on are all part of it. Before deciding on the ideal programming language for your mobile app, you need to think about a few things.

Your firm will achieve significant success if you use the proper and appropriate programming language. As a result, before deciding on a language, you should consider its benefits and drawbacks. The following factors should be considered in this regard:

There are a lot of programming languages out there right now, but what makes a language unique are its features. You may use Kotlin, C, C##, Java, AngularJS, Python, and other languages.

How MultiQoS Can Help in Developing Real-Time Applications?

If you want to build a real-time application, you should contact an experienced and reputable Mobile App Development Company in India. MultiQoS can also help you construct an excellent real-time application by providing Python developers. So, let’s get connected and start developing websites.

Python is a powerful and adaptable programming language that is quickly gaining traction among professionals in a variety of fields. Thanks to its broad ecosystem of various libraries, it can be applied in practically any domain. We attempted to highlight the top 16 real-world Python apps in this article.

If you’re a novice who wants to learn how to program, we hope this article convinces you to use Python as your first language. If you choose Python, we have a tonne of resources for you, including top Python books, MOOCs, GitHub repositories, and a selection of popular tools and features.

– What Factors Affect Python’s Popularity in 2022?

Every field has a Python answer. It is the most adaptable language to date, and it has a promising future. Python is often regarded as the best programming language for a variety of applications. Machine Learning and AI, Web Development, Data Analytics, Game Development, IoT, Application Development, and Game Development are just a few of the significant fields. It is used extensively in a variety of industries, including healthcare, finance, aerospace, and banking. Many well-known companies have either written their apps in Python or switched their entire tech stack to Py. YouTube, Google, Instagram, and Pinterest are just a few of them.

– What Are the Job Duties of a Python Developer?

If you know Python well, you may be able to pursue a variety of job prospects.

– After learning Python, you can start working as a Python developer. Python programmers are in charge of creating websites, optimizing data methods, and writing clean, efficient Python code.

-A data analyst is responsible for dealing with vast amounts of data, analyzing it, and creating visualizations from it. This position is for you if you are a Python nerd who enjoys playing with data.

-Project management is in great demand since project managers are in charge of a company’s business and marketing.

-A machine learning engineer prepares computers or models to make predictions based on the data they are given.

– What Are the Most Popular Python Libraries?

Python has a large number of libraries and packages, but as a Python expert, you should be familiar with the most often used Python libraries. Some of the most python-based libraries are as follows: Machine Learning engineers will like TensorFlow. Google created this library, which may be classified as a computational library. Numpy is a deep-learning library that performs internal operations for other Python libraries such as TensorFlow. Keras is another well-known Python package that makes it easy to use neural networks.