Quick Summary on Database Types The debate over Firebase vs MongoDB has been raging for quite some time among developers. Both Firebase and MongoDB are attempting to provide contemporary database… 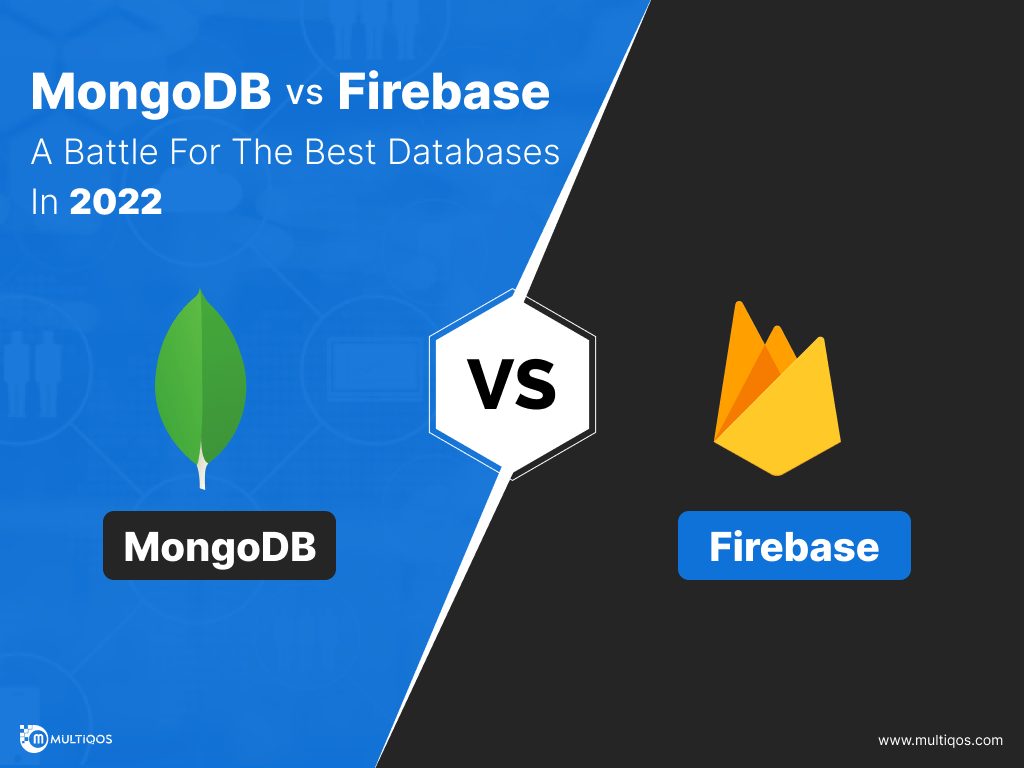 The debate over Firebase vs MongoDB has been raging for quite some time among developers. Both Firebase and MongoDB are attempting to provide contemporary database solutions for application developers that are strong and scalable. Customers in every business seek extremely useable, significantly reduced interfaces and self-service experiences that developers are no different from the rest.

NoSQL databases are used to store and retrieve data because they do not require relational databases. These are highly beneficial for big data and real-time web applications. The data is structured hierarchically in this section. It’s possible to keep inserting branches and sub-branches after entering the new information.

Why Did the Companies Move from SQL to NoSQL?

There were numerous disadvantages that firms had to deal with as a result of implementing a SQL database. The NoSQL database appears to have overcome these issues.

Founded in 2012, Firebase is a product of Google. This database stores and synchronises real-time data. Cloud-based real-time document storage can be accessed from any mobile device, including iOS and Android. A single Realtime Database instance is shared by all JavaScript users, who are automatically updated with the most recent data. Firebase delivers back-end development and covers all of the requirements of cross-platform applications. For future reference, a copy of every database change is retained in Cloud Firestore vs MongoDB.

Suite of Features Offered by Firebase

Also Read: Ecommerce: Top trends to watch out for in 2023

Nonrelational (NoSQL) databases such as MongoDB are cross-platform and don’t require data to be stored in rows and columns. MongoDB is fast and doesn’t require us to predefine a schema like a traditional RDBMS because it’s dynamic. This open-source document database stores data using key-value pairs. In February of 2009, MongoDB was first released by MongoDB Inc. C++, Go, JavaScript, and Python are all used in the code’s development. High scalability and scalability are the hallmarks of MongoDB, which is fast, dependable, and scalable. MongoDB’s primary focus is on data storage; hence it lacks a comprehensive ecosystem like Firebase’s. It has so many useful features that the developer is compelled to use them to the fullest extent possible. They have quite a great deal of power in designing applications because they no longer have to make their apps fit the database’s needs. Because of this, MongoDB is able to fulfil the app’s data storage needs.

Suite of Features Offered by MongoDB

Common Comparisons of Firebase vs MongoDB

Entrepreneurs have a tendency to make the same mistakes over and over again.  It’s common for developers to skip over the back-end design specifications when selecting technologies for a whole mobile app solution. The more you know about cloud storage and databases, the better off you’ll be. The first thing you should understand about any database is how it is used technically. To choose the best one from the firebase database vs MongoDB.

for your product, you first need to understand the context in which it is being used.

Here, we’ll compare the two databases, firebase DB vs MongoDB, so that you can decide which one is better for your specific needs. To begin with, it’s vital to comprehend the fundamental concepts of databases and the things that make them up.

Pros of MongoDB Vs Firebase

Also Read: How To Start A Crowdfunding Website In 2023?

Cons of MongoDB Vs Firebase

Firebase vs MongoDB: The Key Differences

In the Firebase vs MongoDB performance comparison, both Firebase and MongoDB are built to scale, and it’s difficult not to conclude that MongoDB wins out in terms of pure performance because of MongoDB’s customizability and the spectrum of Atlas efficiency tiers. According to third-party reviewers, MongoDB outperforms Firebase; however, it depends on your individual issue space and usage habit. It makes perfect sense that MongoDB is faster than relational database systems because it was built to accommodate fast-moving data pipelines and online transaction processing.

Firebase vs MongoDB: Use of Service

One difference between Firebase and MongoDB is how the service is used. Anybody, anywhere, and anonymously may utilise the Firebase. The data saved in Firebase can be accessed by any device, while only authorized users access the database’s store data in MongoDB. Additionally, appropriate identification is necessary since the MongoDB database is more secure than Firebase.

The Google Firebase vs MongoDB comparison demonstrates the market prominence of both Firebase and MongoDB. There are an average of 70 inquiries for MongoDB and 42 searches for Firebase, as shown in the graph of queries. According to Stack Overflow Trends, Firebase has seen a significant surge, whereas MongoDB has seen a more sluggish rise. However, at the moment, they are both on the same level.

In comparison with MongoDB vs Firebase pricing, you may pay as you go with various pricing options in Firebase. However, in Firebase vs MongoDB pricing, for the latter, the premium edition, you’ll have a fully-managed service that doesn’t require a dedicated server (using MongoDB servers).

Firebase Vs MongoDB: Where to Use Each Database

Firebase Vs. MongoDB: Where Not to Use Each Database

Firebase or Mongodb: Which One Is Better in 2023?

Various issues necessitate a variety of approaches. The database to be used will be determined by the problem at hand and the database’s benefits and drawbacks.  It is possible that hiring dedicated developers will aid in creating the greatest possible app or website since a team of skilled developers will have the expertise to contribute to the Mobile App Solutions. Furthermore, you’ll need to hire dedicated programmers to set up the database’s structure and create a successful application.

If you are wondering which is better, Firebase or MongoDB, both Firebase and MongoDB are special on their own and have their set of advantages and disadvantages. In addition, they have access to their skills and the ability to work together. Firebase is optimized for real-time updates and data management, but MongoDB is the ideal option for large organizations needing instant access to enormous amounts of data. It shall depend upon the requirements of the companies, and you have to make the final call. Prior to making a final decision, you must balance all of the pros and disadvantages. It doesn’t matter what database you use, but make sure highly qualified experts set up your back-end database structure for web and mobile app development purposes. You can hire a mobile app development company India or Hire Dedicated Developers India to help you provide better inputs in choosing the best option by listing your required features and comparing Firebase vs MongoDB.

FAQs of Firebase and MongoDB

Both Firebase and MongoDB are one-of-a-kind. They’ve got their speciality and a place to work with others. While MongoDB is best suited for quick data management for big companies, the Firebase is great for real-time changes and data management.

MySQL is the most widely used relational database management system on the market (RDBMS). Small and large-scale applications can be created with this tool. The data in SQL databases are arranged sequentially. Excel spreadsheets are used to store these data.

Developing mobile applications is made easier with the help of tools like MongoDB and Firebase. However, Firebase is difficult to surpass when it comes to back-end services. Still, when it comes to application development, you’ll find the most power and flexibility in the form of MongoDB (and notably MongoDB Atlas), which can handle both transaction and warehouse-style operations in the same system.

If you’re wondering if Firebase or MongoDB is superior, each are unique in their own right, with their own set of benefits and drawbacks. They also have access to their expertise and the capacity to collaborate.

MongoDB has the ability to adapt to changing data needs.
You can use it for the following purposes:

Many more firms use MongoDB and Firebase for web and mobile applications.