Java Vs Kotlin: Which is Better Option for Android App Development in 2023?

Java Vs Kotlin: The Battle of Programming Languages Android app development has become a popular way to grow your business. Still, the programming language you choose is the most critical… 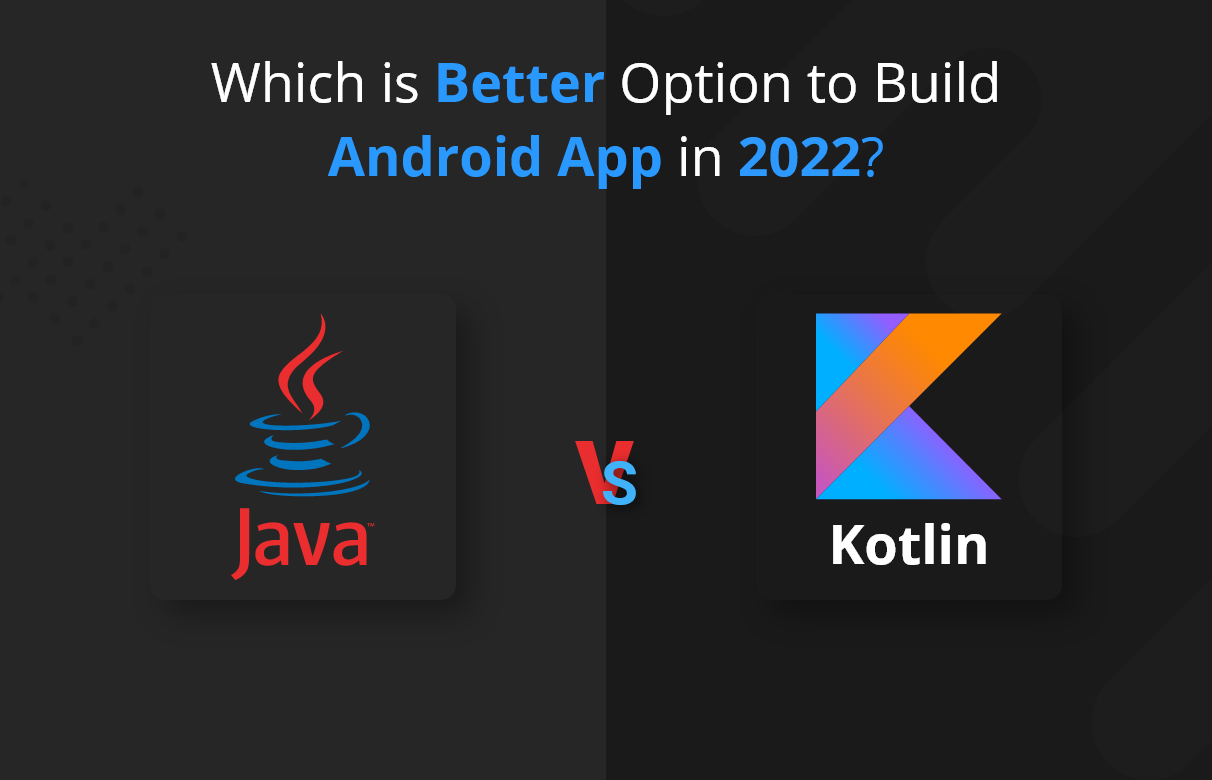 Java Vs Kotlin: The Battle of Programming Languages

Android app development has become a popular way to grow your business. Still, the programming language you choose is the most critical component in determining whether or not it will be a success. Because it is widely available, Java is the best solution for a more significant number of users. However, the advent of Kotlin into the scene eroded Android app development language for developers’ faith in Java. According to several sources, sticking to Java for Android didn’t provide Google many advantages. As a result, switching to Kotlin felt like the best solution. However, there are numerous factors at play when it comes to choosing between the two Android app development languages. Each factor has to be scrutinized to arrive at the answer.

What Is Java? – Constant Driving Force in Android App Development

Classes and object-oriented programming are the hallmarks of the Java programming language. It’s an application development platform on a computer. As a result, Java is a fast, secure, and trustworthy programming language. It’s frequently used to build Java programs in laptops, storage systems, gaming systems, scientific supercomputers, cellular phones, and other locations. The Java Platform is a collection of tools that help programmers create and run Java programming programs. It comprises a compiler, an operation engine, and a set of resources. In addition, it provides a repository for software and technical documentation.

What are the Benefits of Java?

What are the Challenges of the Java language?

What Is Kotlin? – Official Google Language for Android Development

Kotlin is an open, free software, statically typed “practical” software platform that combines object-oriented and usable coding features. It was created with the JVM (Java Virtual Machine) and Android in mind. Clarity, interoperability, safety, and tooling support are all priorities. Anonymous functions, closures, generics, higher-order functions, inline functions, lambdas, and tail recursion are also supported by the language. Kotlin, in other words, offers all of the benefits and characteristics of a functional language. Kotlin versions for JavaScript ES5.1 and android native development kit (using LLVM) for various processors are also available.

What are the Benefits of Kotlin?

What are the Challenges of the Kotlin language?

Kotlin vs Java: A Quick Roundup

First and foremost, both Java and Kotlin compile to bytecode, notwithstanding their differences. As a result, developers may call Kotlin code from Java or vice versa, allowing both Android development languages to be utilized in the same project. As you’ve seen, Kotlin has a lot of advantages when it comes to Android programming, but is it better than Java? Regardless of the fact that Kotlin is quite popular among programmers, just a few programmers work in this field. The reality about Kotlin is that it requires an in-depth understanding of the language, yet finding qualified Kotlin professionals is becoming increasingly difficult.

Kotlin vs Java  — An Ultimate Comparison With Examples

Java programmers are frequently frustrated with NullPointerExceptions. By default, all kinds in Kotlin are non-nullable (unable to retain a null value). In Kotlin, a build time error is displayed if the code tries to utilize or return null. For example,

So, Who Took The Crown?

Kotlin is quickly becoming the next Android programming language. Its popularity stems from its essential features that make developers’ lives simpler, such as extension functions, lambda expressions, high-order functions, coroutines, and no NullPointerExceptions. These are just a few of the reasons why it’s reasonable to say that Kotlin is superior to Java for Android development and will continue to do so in the future.

Kotlin Vs Java. When to Use & What Are the Applications Examples

Kotlin, a modern computer program and statically typed computer language, was invented by JetBrains. It’s ideal for building server-side apps since it allows users to write more succinct code than Java, allowing Android app developers to solve problems with fewer lines of code. Engineers can develop, read, and alter code more effectively using Kotlin to improve code maintainability and readability. When comparing the advantages of Java vs Kotlin, developers may utilize Kotlin for everything where Java is currently used, such as server, client, web apps, and Android application development.

Verdict on Java vs Kotlin Battle

Null protection, unchecked exceptions, property control, smart casts, and lazy loading are just a few of the perks of Kotlin. In the kotlin versus java competition, Kotlin offers several other valuable characteristics that make it a good programming language.

What are the Key Features of Kotlin Language?

What are the Business Benefits of Kotlin?

Does Kotlin Have a Future?

Kotlin is currently considered a recommended programming language for Android by Google. To be sure, Google’s formal sponsorship of Kotlin will help it catch up to Java’s popularity (or even more so). But don’t forget that Java isn’t only for Android; it has an extensive ecosystem, and it’ll take a long time for Java developers to switch to Kotlin for all of their Java-based products, which won’t always make sense from a commercial standpoint. It’s fair to assume that those two languages will coexist for a long time.

Also Read: Top Business Challenges and How MultiQoS Is Solving Them

Kotlin is swiftly establishing itself as a better programming language for mobile app development, giving developers various opportunities to experiment with cutting-edge programming. It’s safe to say that Kotlin is changing the game when it comes to what a programming language can do. To summarise, the dispute over whether language is superior is not simple and will almost certainly result in lively debates. Furthermore, there are additional factors in play than just the distinctions in the languages, like the language used by the company and how familiar programmers are with Kotlin or Java.

MultiQoS provides high-value, feature-rich Android app solutions to businesses in a variety of industries all over the world. Contact us today for a free consultation on developing the next consumer-pleasing mobile application for your company.

FAQ About Java vs Kotlin

In 2021, Kotlin will be the primary language for Android development. Although both Java and Kotlin can be used to create performant and valuable apps, Google’s frameworks, tools, documenting, and study materials continue to favour Kotlin, making it the better language for Android today.

Kotlin is a programming language for Android that is concise, expressive, and type- and null-safe. It readily interacts with the Java language, allowing Java developers to continue using it while progressively adding Kotlin code and exploiting Kotlin resources. Furthermore, many Android developers have discovered that Kotlin makes development faster and more enjoyable; thus, you aim to provide more robust support for Kotlin users. More about Android’s Kotlin-first strategy may be found here.

No, even if the proper answer is contingent on the performance metrics in question. The functionality of the languages is relatively close during runtime. Kotlin, on the other hand, is noticeably slower than Java at compile time. The severity of the slowness is determined by several factors, including the use of annotation processors and the availability of mixed Java and Kotlin source libraries.