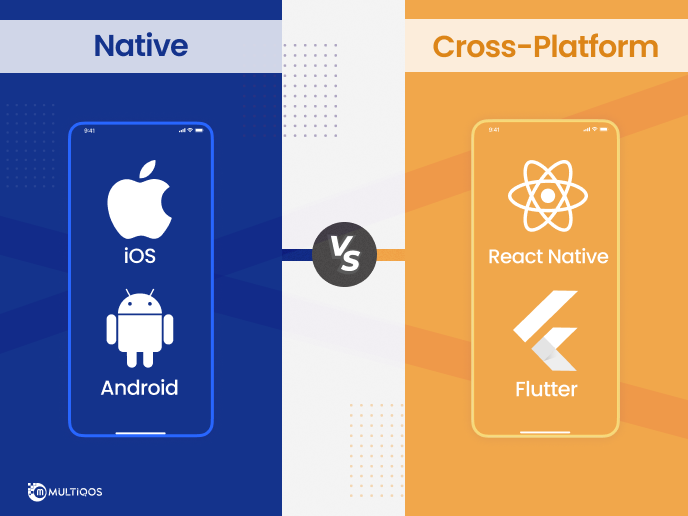 Engineers are now able to deliver dependable mobile solutions that have a performance that is consistent across all mobile platforms as a direct result of the rapid growth of software technology. The most popular option for developing a native application in the past five to six years was to use programming languages such as Java and Objective-C. However, the current market provides cross-platform technologies that enable mobile app development company to obtain an experience comparable to that of a native application.

Before developing a software solution to address issues that arise in a company’s operations, it is essential to choose between developing apps that run on native platforms and those that run across many platforms. Businesses have the opportunity to increase user engagement, performance, and costs by tailoring the route to the particulars of each project.

According to projections, the income generated by mobile apps will surpass $935 billion by the year 2023. Businesses all over the globe are rapidly building customized mobile apps to serve their consumers better, improve their operations, increase their productivity, and automate their processes. Despite this, as the owner of a firm and Mobile App Developers, you could have difficulty selecting whether to pursue both or not among cross-platform vs. native mobile development. As a result, we will conduct an in-depth analysis of the benefits and downsides of each of these variants. But before we get into it, let’s examine some fascinating facts.

A mobile app designed exclusively for a mobile platform is referred to as a native mobile app. The whole body of code is generated by hand by the team of Mobile Application Development professionals making use of the programming language that is supported by the platform.

On the other hand, an HTML5 and JavaScript-based application framework make up a cross-platform mobile app. This framework is automatically constructed. There is a possibility that native apps may add support for other features like the camera, location, accelerometer, and so on. 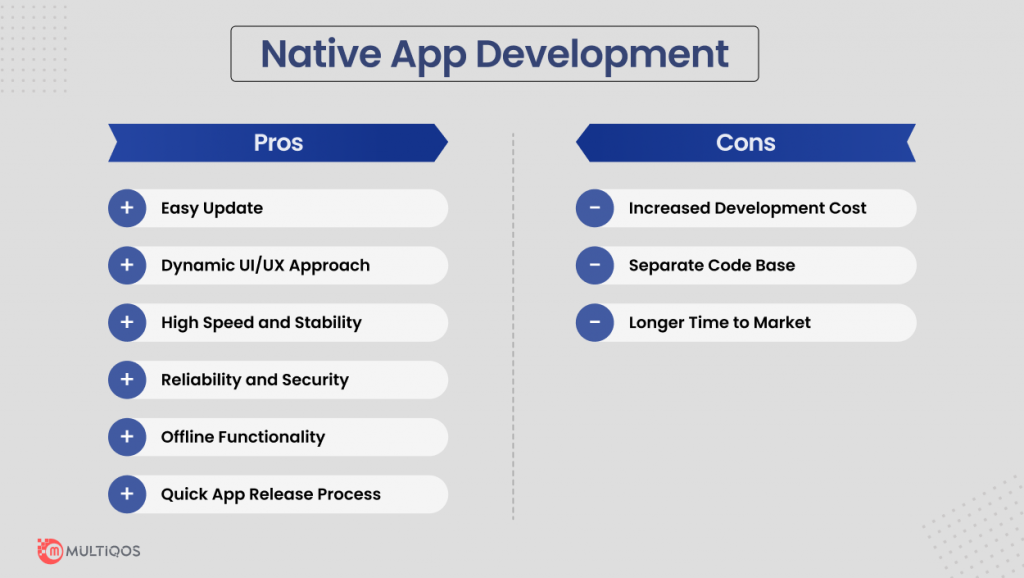 People from all around the world communicate with one another using WhatsApp, which is popular messaging software. It was developed as a native application that can run on iOS and Android smartphones. This platform was at the very top of the app popularity rankings in the third quarter of 2020, when an astounding 140 million individuals all across the globe downloaded it. This native app is a good example of a practical alternative to the conventional ways of communication that are often used inside a workplace.

An example of a popular native application, Spotify, is a music streaming service that promotes itself as one of the essential applications for music lovers to have on their mobile devices. To add more clarification, it is a centralized digital music service that gives customers access to millions of songs and podcasts from a wide variety of record labels and media companies located all over the globe. In addition, Spotify is an excellent example of a cloud-native application that has succeeded greatly. Spotify has been able to greatly expand its capacity to satisfy the demands of its users as a result of the company’s migration of its workloads to Google Cloud.

Waze is a GPS navigation program that has received recognition all around the world. This is a functioning example of a native app that can be used on mobile devices with GPS capabilities. For example, the app assists its users in getting about by giving them specific directions, information about their routes, and even predicted travel times based on the experiences of other app users. Waze is also completely free, so using it is a win in every sense.

Also Read: AWS Vs Azure Vs GCP – The Cloud Platform of Your Choice? 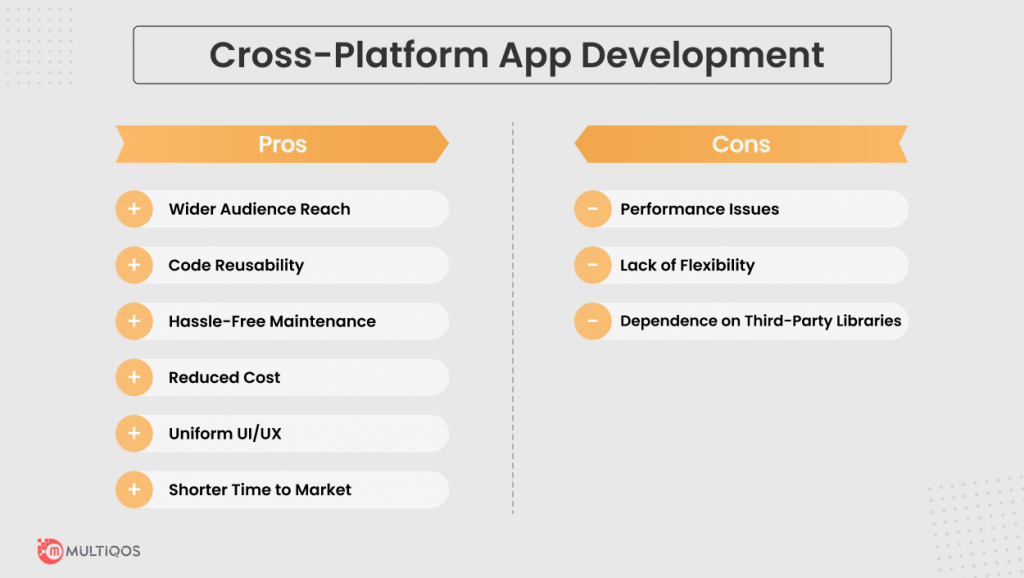 There is an overwhelming selection of PDF readers that may be downloaded. In addition, a PDF reader tailored to every operating system is readily accessible for download. On the other hand, Adobe Reader is miles ahead of the competition in terms of its quality and the ease with which it may be used. Because it is the de facto standard for PDFs and has clients for practically every operating system, it is unquestionably the leader in its field.

VLC is one of the most adaptable and user-friendly media players available today; it is quite unlikely that you will discover one superior to it. VLC is possible on various operating systems, including but not limited to Linux, Mac OS X, Windows, *BSD, UNIX, Solaris, and many more. It supports almost any media format imaginable and can do so over a network. It takes up little space, may be obtained without cost, and is constructed using code that is publicly accessible to the public.

Not since the development of the World Wide Web has the use of a browser met this level of enthusiasm. Not only was Google Chrome successful in increasing brand recognition, but it also made competitors anxious about their position in the market. Google Chrome is a web browser that is quick, dependable, adaptable, and available on several platforms. According to certain tests, the Linux version of Google Chrome is the fastest rendering browser available on any platform (not called IE).

Also Read: Native vs Hybrid: Which One is Best for Your Business?

How to Choose Between Native Development and Cross-Platform Development?

Before opting for one development plan over another, several considerations need to be made. Consider the goals your organization wants to achieve, the features that absolutely must be included, and the languages and technologies your workforce is already acquainted with.

Our Experience with Native vs. Cross-Platform Apps

It is vital that you allocate resources to a mobile app development plan that is targeted to your company’s unique demands and objectives and those of your target market, regardless of what sector of the economy you operate in.

Whether you should design native apps, hybrid applications, or cross-platform applications will be determined by the needs of your firm. The first thing that businesses need to do in order to begin the process of developing an innovative and powerful app is to determine what it is that they require. Once they have a solid understanding of what they require, they can start looking into development platforms that are best suited to meet those requirements.

Native, hybrid and cross-platform app development have their benefits and drawbacks; picking one over the others involves taking a step back and considering the bigger picture and what you want to achieve with the app. In the long run, it will assist you in reaching the pinnacle of success by providing you with the ability to develop a mobile app that is cutting edge and captivating.

The ever-increasing number of apps currently available for download in both the Google Play Store and the Apple App Store may make it appear to be an insurmountable obstacle for businesses to find the secret formula for a successful app launch that will differentiate them from their competitors. Without a solid understanding of the primary features, pros, and disadvantages of mobile development native vs. cross-platform, and the functioning behind each development style, it may be difficult to decide which development method is best for your organization. It will give you an edge over the competition.

This decision may be difficult because it may be difficult to decide which method of development is best for your organization and will give you an edge over the competition. When deciding on a development plan for a new app, it is crucial to consider several factors, including the software’s intended purpose, the resources that are already available, and the consumers who will be using the app.

FAQs on Native vs. Cross-Platform App

React Native is a cross-platform development platform that allows you to build fast, responsive apps with little coding. It’s designed specifically for mobile devices and uses JavaScript, which can be roughly interpreted as an object-oriented programming language. Because React Native apps are built on top of Democratized JavaScript libraries, they run quickly and smoothly on various mobile platforms.

Hybrid applications work on several platforms, whereas native apps are developed specifically for one.

When it comes to creating native applications, one of the greatest options is React Native.

Using a single set of codes, developers may create mobile applications that can run on several platforms.

The native and cross-platform difference lies in their design to work on many operating systems.

It is important to consider your company’s specific needs. Native applications are the way to go if you have a big budget and want high-performance software. Cross-platform software is viable if you need to maximize resources while keeping costs down.