What Is Mobile App Testing? It is a software testing procedure that is used to evaluate mobile apps for operation, accessibility, user experience, and reliability flaws. Mobile testing can be conducted… 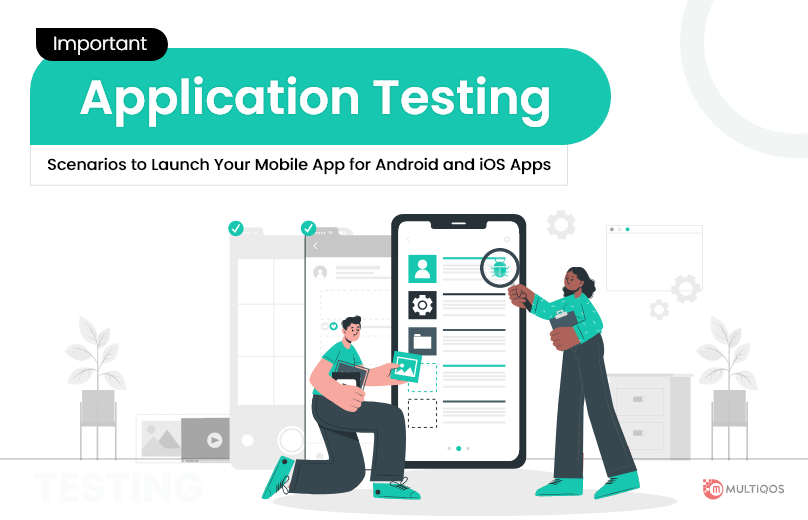 What Is Mobile App Testing?

It is a software testing procedure that is used to evaluate mobile apps for operation, accessibility, user experience, and reliability flaws. Mobile testing can be conducted manually or by using test automation solutions like Appium. Performance testing for mobile applications before releasing it ensures that it is bug-free and prevents problems from developing in the future. This post outlines the best app testing scenarios to help you uncover bugs, malfunctions, and mistakes in your app and get it ready for launch.

The statistics mentioned above put forth a clear idea that why exactly it is vital to run an Android mobile app testing A well-tested software provides a positive user experience. So you must never miss it.

Users of mobile applications discard apps that malfunction, hang, load slowly, or provide a terrible user experience in seconds. It results in negative app store reviews. Moreover, after an app is installed on a user’s device, it takes a long time to rectify the faults, re-submit the software to the app store, and wait for app users to install it. Further, users avoid utilizing apps that contain useless data or just deplete the device’s power. Also, apps should respond to a variety of events, such as device on/off, entering airplane mode, WiFi on/off or linked to another, Bluetooth, or USB.

So, to reduce difficulties and improve the app’s quality, you must undertake an effective assessment. It will attract app users and generate favorable feedback and ratings. It is the prime reason behind evaluating apps to ensure their operation, usability, and efficiency.

The strategy for mobile app performance testing has a significant impact on the app you are testing. Regardless of the business for which the app was developed, mobile applications are generically classified into four categories:

Although there are some parallels between mobile device testing and web app testing, there are also significant distinctions between mobile and desktop apps. Let’s have a list of various stages of mobile application screening.

This is the preliminary module of mobile app testing. In this phase, the app testers are provided with wireframes representing screen layouts, navigational charts, and any other needs that are not clearly stated in the design. The mobile app testing team then examines these criteria for accuracy and consistency. Any inconsistencies discovered in the specifications are then rectified before the commencement of mobile app development. During the documentation testing process, numerous requirements artifacts are created and analyzed.

This phase of mobile app testing is carried out to confirm that the produced app is functional and meets the criteria. When doing functional testing for your phone app, consider the following:

This form of testing is required to assure the end user’s comfort while using the program, which includes an intuitive interface that complies with industry standards. It is done to design apps that are quick and simple to use. Here are the three primary basic criteria for app evaluation:

It ensures if the buttons are not of too small size and can be easily accessible along with verification if the mobile app works in multitasking mode, when necessary. It further determines the quality of images, themes, functions like zoom in and zooms out along with screen load speed.

User Interface (UI) testing ensures that the graphical user interface (GUI) of your software satisfies all of the needed criteria. Here are some fundamental validations that a mobile app tester should perform throughout the UI testing phase:

Compatibility (Configuration) testing is carried out to guarantee optimal performance metrics when used across various sorts of mobile devices – taking into consideration their screen resolution, display, OS version, phone model, underlying hardware, and so on. When performing mobile app compatibility (configuration) testing, the following considerations must be considered:

Security testing is done to ensure that the application is secure. A vulnerability scanner assesses the application’s threats from hackers, malware, viruses, and illegal access to private and personal data. Here are some fundamental validations that a mobile app tester must do throughout the security testing phase:

Recovery testing is performed to assess your mobile application’s capacity to endure and then effectively recover from probable failures caused by server faults, malfunctions, or network connectivity issues. Here are some fundamental validations that a smartphone application tester must-do during the recovery testing stage:

Also Read: How to build a taxi booking app like lyft?

Rigorous testing is carried out to guarantee that the development has effectively corrected all defects discovered during each step of testing activities (retesting) and that the new modifications and security patches have not introduced any new problems into the mobile app (regression testing).

The app industry is always expanding as a result of new technologies. According to 2020 statistics, 70 percent of 5 million mobile applications were removed by consumers despite technical concerns.

As a result, marketers are becoming more concerned about increasing app quality for better usability. As a result, new trends and tactics in mobile apps performance testing are emerging more frequently to increase app testing quality. Let’s have a look at some:

When Should We Test the Mobile App?

To acquire high-quality results, you should extensively test a mobile app. You must begin with the design phase and work your way through to the app’s release.

You must conduct the following:

It guarantees that the app has the necessary features and that the user is engaged by the app’s simplicity of use.

Developers verify individual code units before integrating them into the app’s new code.

It checks to see if the new code works correctly when merged into the application.

It ensures that an app provides the aesthetics, performance, and efficiency that consumers expect.

What Factors to Consider in Mobile App Testing?

As mentioned before, testing is an essential component of mobile app development. Next, we’ll look at some of the things you should consider on how to test mobile apps.

How Can We Perform Mobile App Testing – Mobile Testing Methodology

The rivalry in the mobile app industry is at an all-time high. It forces developers to create a ‘how to test a mobile application’ strategy before embarking on a sprint. The end-to-end testing process includes ten prime steps:

Step 1: Preparing the sketch of the process

Step 6: Taking care of usability and the beta version

Step 7: Checking with the performance testing

Step 10: Coming up with the final version of the app

Mobile apps are getting increasingly popular as the number of smartphone users grows. So, to compete, we need to create a unique mobile app that provides the greatest user experience to increase our potential audience. To ensure that your mobile apps are faultless, they must be rigorously tested. The testing teams confront a variety of problems during the mobile application development & testing:

Challenge 2: Testing for variation in devices, in terms of screen size and number of devices

How to Test Mobile Applications Manually?

QA Analysis & testing may include manually testing mobile apps on Android and iOS devices using the two approaches listed below:

Also Read: How to Integrate Payment Gateway in a Mobile App?

The more structured and targeted your Android mobile application testing is, the faster you can incorporate feedback and work hard to enhance your app. Let’s have a look at how we can automate mobile app testing:

Set up the automation testing goals

Let’s take a look at the best techniques for automated mobile app testing that QA testing Services should employ:

What Factors Should You Considering When Choosing Mobile App Testing Tools?

When choosing a tool, there are various factors to consider. Let’s have a look at a few factors on how to test app:

How Much Does App Testing Cost?

According to various claims from project owners on how to test a mobile app, app testing charges from $5,000 and $10,000. The Clutch study states that the combined value of testing and implementation phases ranges from $5,000 to $25,000+.

The cost of Android and ios mobile app development & testing is determined by a variety of factors. As a result, estimating the expense of app testing becomes difficult. However, these are the prime reasons which affect the cost largely:

How to Control The Cost Of Testing?

Several tips can help you save a large amount of money on Android and ios mobile application testing. You can prevent excessive costs in the future by investing more in testing. However, you must spend wisely.

Quality concerns with mobile app solutions may lead to unsatisfied clients, a negative company image, and missed sales opportunities. Systematic and complete mobile app testing is typically the consequence of happy consumers, user happiness, and hence a thriving business for any mobile application.

Although Mobile App Testing has its own set of issues, having the necessary skillset and employing a high-quality smartphone application testing firm may assist reduce the risks involved. This is why selecting the finest mobile app testing company is so important.

Whenever it comes to mobile app testing, we should perform all necessary types of testing. The only difference is that these require more care than others. Monkey testing the app is the most suggested method for determining the app’s robustness when the given data are incorrect.