Most Popular Libraries and Frameworks for iOS App Development in 2023

Introduction Mobile applications make our life so much easier where we can access any information or browse things easily simply with a mere touch. Mobile apps make your day-to-day life… 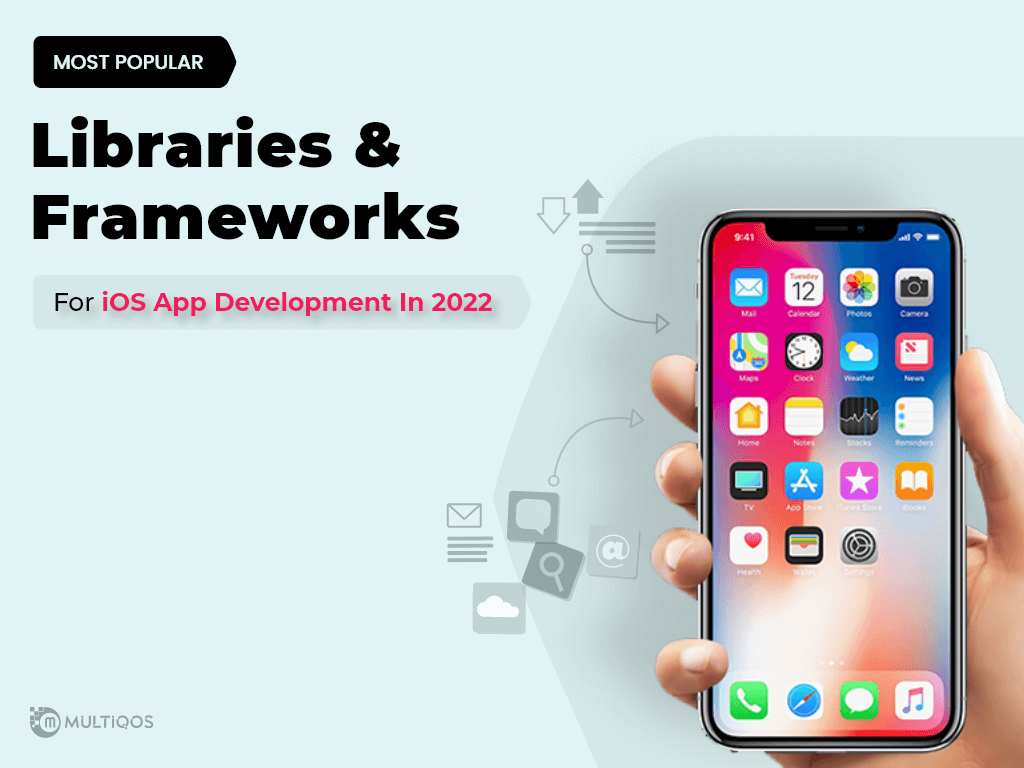 Mobile applications make our life so much easier where we can access any information or browse things easily simply with a mere touch. Mobile apps make your day-to-day life easier, assisting you in swiftly carrying your tasks. People’s demands are always being met as new applications are created on a daily basis. The advancement in technology has played a quintessential role in paving its path through mobile app development, making the process efficient. That being said, it is obvious that the amount of time you spend on your phone is equivalent to the time you sent on the applications.

Mobile application frameworks over the years have significantly become popular for aiding in quick and efficient application development. The presence of a sold framework makes the developmental process easier. Choosing the best framework may be difficult because each developer has a unique set of requirements and preferences. Furthermore, the choice of language and structure is personal; however, we shall discuss some top iOS app development frameworks and libraries for mobile app development.

What Is a Framework?

Frameworks make possible the building and development of web and cross-platform mobile applications. Generally, the experts examine the framework before the application is publicly launched in the market. iOS application development services in USA also aid in the development of fully efficient apps. It aids in the execution of the user’s orders to the program.

A library is a collection of programs that execute specified, well-defined tasks. Generally, the libraries are nothing more than a set of class definitions. The rationale for this is because it is simple code recycling or getting code that other developers have previously produced. Classes and functions are typically used to specify specific actions in a domain.

The Top 4 Frameworks for iOS App Development Are:

For iOS applications, Swiftic is one of the most popular mobile app development framework. Swiftic can be a good choice to use as a framework by the developers since it comes with a 30-day cash-back guarantee which adds to its popularity. Furthermore, Swiftic also provides a 6-months success guarantee scheme, which essentially means that if there is no expected outcome, then the 6-month service period shall be free.

Flutter developed by Google enables the iOS App Developer in USA to develop stunning and impressive native-like applications for various operating sites. Widgets are used in this open-source mobile application SDK to create responsive mobile apps. This functionality allows mobile app developers to easily tweak existing apps and create new ones in the shortest amount of time possible. For Flutter app development, the flutter app would support both the Android and iOS platforms.

Ionic is an open-source mobile app framework that focuses on Angular and Apache Cordova that is free to use. Developers can use this framework to create cross-platform mobile apps for separate platforms: Android, iOS, and Windows. Ionic-based mobile apps are powerful, functionality-rich and native apps with smooth app performance. Dedicated iOS Developer can use the Ionic framework to integrate UI features like list views, filters, forms, action sheets, menu options, and more to improve app design. The Ionic platform is a perfect choice where developers have practical experience with coding languages like HTML, JavaScript, or CSS. Further, the iOS App Development Company in USA owner seeks to develop dynamic, high-performance hybrid/cross-platform mobile and contemporary web apps.

Also Read: Top iOS App Design and Development Trends to Look Out in 2023

The Top 5 Libraries for Ios App Development Are as Follows:

Alamofire can be considered the successor to AF Networking; however, it is developed in Swift. An easy-to-use and extensible way to interact with HTTP network requests is AlamoFire. It makes establishing network requests and pinning a certificate a lot simpler, and it simplifies a lot of additional duties. It no longer supports background downloads as of version five; however, this is a less common use scenario than you might think.

SwiftyJSON makes it easier for you to work with JSON in Swift. Due to types casting difficulties that render it extremely difficult to deserialize model objects, processing JSON with Swift can be challenging. It may need a slew of chained if statements. SwiftyJSON enables it all very easy to do. It is the most widely used Swift library.

SVProgressHud can be considered another HUD library for the tvOS and iOS. Since it produces a singleton, the API is a little easier than using MBProgressHUD since you would only have to call display and hide when utilizing it. You can also add text, an image, or a progress indication to the HUD. Furthermore, this is a necessary feature when designing apps, and it is a viable substitute for MBProgressHUD.

Masonry is a lightweight platform that makes working with AutoLayout a lot easier thanks to its clear syntax. It comes with its chainable DSL, making AutoLayout programming clearer and simpler. It also includes various helper methods for typical layouts that reduce over a dozen pieces of code to a single phrase using AutoLayout.

Adding pull-to-refresh capabilities to a UITableView is simple using MJRefresh. However, the basic UIRefreshControl lacks customization features, so MJRefresh is an excellent substitute that allows you to add text, an animation, or maybe even a UIView. Pull-to-refresh operations can also be added to a block or closure, making it much easier to use than the native UIActivityIndicatorView.

Also Read: How to Build a Calendar App For iPhone & iPad: Ultimate Guide

It is becoming more and more common for mobile app developers to create cross-platform apps. Progress in code and script, platform connection, the mobile app development process, and distribution have led to a paradigm change in mobile development trends. Popular libraries and frameworks that aid in iOS App Development Services, which is in high demand and would facilitate the development of mobile applications, are listed here. Hence, do not wait and get your Ios App Development framework done by us, as we are considered as a top ios app development company in india. For more, book a free consultation with one of our client executives and get your queries solved within a few minutes.

FAQ On iOS Libraries and Frameworks

With 42 percent of programmers worldwide utilising React Native, it’s one of the most popular mobile app frameworks on the market today.

Because each framework has its own distinctiveness, developers are drawn to use it. Following React and Angular are prominent front-end frameworks, jQuery is the most widely used of them all. The best framework for your project depends only on your project’s requirements and your company’s demands.

Some frameworks may be learned in a short period of time, while others need a lot of time and effort to master. They want to make the development process as easy as possible, thus they’re going for simplicity.