Introduction Flutter 2.5 version 2.14 was launched on 8th September 2021. In the history of the flutter releases, this one closed 4,600 issues from 256 contributors with 216 reviewers. It… 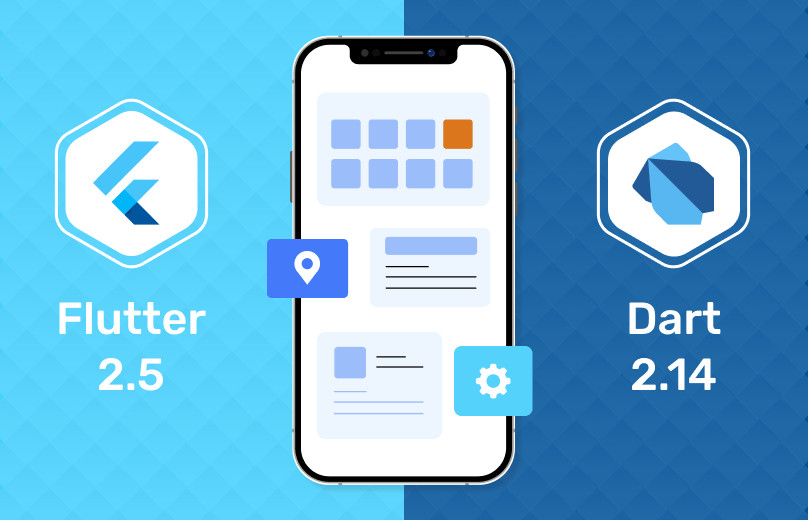 Flutter 2.5 version 2.14 was launched on 8th September 2021. In the history of the flutter releases, this one closed 4,600 issues from 256 contributors with 216 reviewers. It is one of the most significant releases by Google. Today, we would be discussing what all is new in this latest version.

Flutter 2.5 is remarkable on the performance side. It has made huge performance enhancements, including a PR that efficiently wires up the precompilation of shaders from offline test runs. This useful addition to the version reduces the worst-case farmer raster by two-third.

Flutter 2.5 version 2.14 is reducing iOS jank. It comes with iOS shader warmup, async tasks, GC & message passing.  Since, flutter is one of the most dynamic platforms through which you can develop engaging high-end apps for Android and iOS, the interruptions in animations during asynchronous events were a buzzkill for a lot of flutter app developers. In version 2.14, the process is now more streamlined and eliminates janks.

Jank increase in GC was another issue, paused UI threads to save memory. With the improvements in the DART language, this can be more optimized. Dart VM did not have optimal efficiency. In a bid to reclaim memory, more GCs came into use, which caused memory-constrained devices to freeze.

Furthermore, for iOS App Development, you have another benefit. Flutter apps built on Apple Silicon M1 can run seamlessly on stimulators. App testing has improved and it is a major step on the way to achieving complete support in Flutter for Apple Silicon.

Flutter 2.5 is one of the most significant versions of Flutter. It comes with multiple improvements. Exclusively for android development, the team at Flutter has resolved a lot of issues.

flutter app development is more streamlined. It supports full screen and the names of these modes are sticky, sticky immersive, lean back, and edge to edge. This enables Flutter app developers to create more engaging applications, and you can write codes to make an app come in fullscreen at the point of return of the system UI.

You can learn more about pull requests on the Flutter GitHub Repository. In flutter 2.5, the developers can make features, inclusive updates, button sizes, and themes using material You. In the latest update, you will find Materialstate.strolled.

Also, during flutter mobile app development you would not be required to write fresh code, and it fetches it directly from scrollMetricNotification.

With Flutter 2.5 you can also add a material banner to ScaffoldMessanger. It is an upgrade of Flutter 2’s SnackBars and notifications at the bottom of the screen. More to new features, now you can add banners that will stay in place until dismissed. All you have to do is deploy showmaterialbanner process in the scaffodlmessenger.

As per the guidelines, the app can only show one banner at one time. If showmaterialbanner is called multiple times, the scaffoldmessenger would queue up the request and display it easily from latest to oldest.

Apart from this, the extensive text editing feature like pivot points in text selection and also comes with out-of-the-box features such as halting a keyboard event once deployed.

Flutter App Development for startups is easier than ever with Flutter 2.5, It comes with a variety of upgrades to flutter DevTools. The DevTools provide advanced Flutter engine updates. These updates also provide the benefit of working better while connecting trace events to specific frames. It helps people take control of the development budget and the DevTools frame chart helps to select a frame and dive back to the event timeline of the specific frame.

You can run your app for the first time with flutter run. This would allow you to clear the catch and you can reproduce the first run environments. If you happen to address CPU performance issues you would not get overloaded with data from Dart, flutter libraries, and the engine’s native code.  Also, flutter 2.5 supports the functionality of turning off any of these so that you can focus on the coding. There is still scope for improvement in this feature.

You can also turn off any of these using CPU Profiler so that you can work on the code. Also for filtering out categories, Flutter 2.5 features a color code theme for easy location on the CPU frame chart, detailing where and when they come from within the system.

The widget inspector is updated in the new version and allows you to hover over a specific widget and evaluate it, view the properties, state, and more.

Also, when you select a widget, automatically it is highlighted in the inspector console. This makes it easy for you to view the properties. If you happen to pause at a breakpoint.

The debug toggle too has added features such as it provides better information on the new icons, labels, and provides tooltips that aid flutter app development companies. The debug toggle button is also more informative, and assists in the developer’s process to build more dynamic applications. Each tooltip would lead to feature documentation.

Scanning and locating widgets are often used in the development process. The widgets are color-coded based on the type and also provide a content preview. Down the line, the color scheme alignment of the layout explorer has easy identification which enhances a developer’s experience.

Read More: Flutter For Web: How to Create and Run Your First Flutter Web Application

Outstanding feature of Flutter 2.5, the IntelliJ / Android Studio plugin is something that stands apart. Now developers have added a facility to run the integration and unit tests from testwidgets().

If you want to run an integration test or connect the test with Android studio, you can now also run a configuration to launch the test and connect with a device. Running the configuration is facilitated for making the testing process much easier. Now it is streamlined, inclusive of setting stepping and breakpoints.

Flutter 2.5 also allows the developers to see the information for integrations and unit tests. The features is also easily accessible through a button on the toolbar. The Flutter 2.5 also displayed the coverage info in the form of red and green bars, making it much easier to identify what has been tested and whatnot.

In flutter 2.5, you can enable icon previews by telling the flutter plugin which package is the one that you are using. There is also a new text field on the preferences/ plugin setting page.

These two new commands offer type-to-filter convenience for the list of packages from pub.dev.

Another interesting feature, “FixAll” can help a developer to fix all the issues that Dart.fix can, this includes the file that is currently open and this all fixed in a single step.

By adding source.fixAll to the editor.codeActionOnSave Vs Code Setting. If you want to preview you can run command such as Dart.previewVsCodeTestRunner. This would help you view all the test runs.

Flutter 2.5’s Visual Studio Code test runner would appear very different from the familiar Dart’s test runner. The new gutter sports icons display the state of the test and are clickable for facilitating the test’s running. A right-click would also give you a handly drop-down of the context menu.

Flutter was an efficient technology, but a lot of developers complained about the features and found development exhaustive on the earlier versions. Like earlier, the framework did not allow the expectations to go through, and the framework would cancel the unhandled expectation situation. But now they can trigger a debugger.

The Flutter 2.5 debuggers are now efficient in breaking correctly on unhandled expectations. Also, the experience is much improved, given that the developers are now capable to identify the throwing line of code. Also,  the all-new Flutter 2.5 enables developers to choose whether a FutureBuilder should swallow or rethrow errors.

Now, Flutter 2.5 also has a better template accessible through $ Flutter create -t skeleton my_app. It creates a double-page list view Flutter App following community standards and practices. The template also offers reviews to offer a better base for building feature-rich, high-performance apps such as an enterprise-grade app. There are ChangeNotifier to connect with and work on multiple widgets. The features are:

Furthermore, for plugin development, you can use Pigeon a code generator tools that help you get typesafe interoperable code between the host platform and Flutter. Pigeon also helps you defile APIs and generate skeleton code for Java, Dart, and Object-C. It can be used with Flutter 2.5 and provides more messages, return types, primitive data types as arguments.

Flutter 2.5 is a highly significant version of Flutter. It has some major improvements and also the improvements in Dart are promising. The version comes with amazing features such as improved Visual code studio, Android Studio, and also makes it very easy for the developers to build efficient, feature-rich mobile applications. This quality of framework would make is more convenient for developers to focus on the performance of the application while making the development less exhaustive, and more quality-driven.