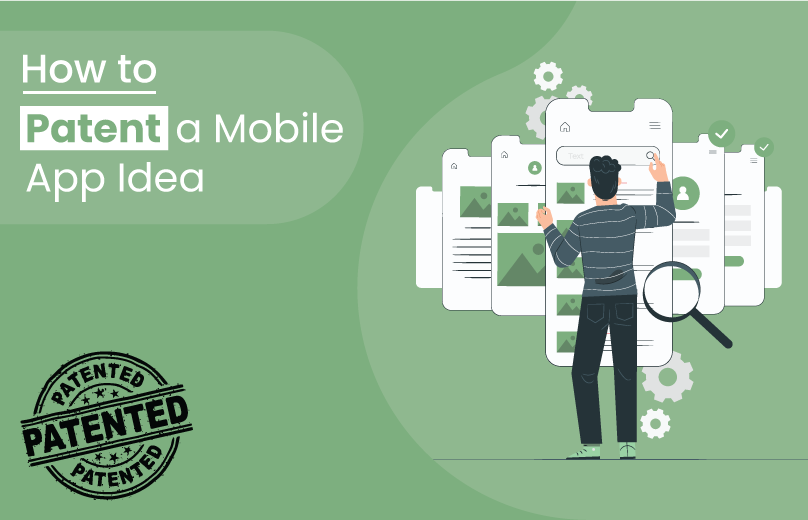 With the advancement of mobile technologies, increasingly, people are opting for a mobile app for their products and services…

With the advancement of mobile technologies, increasingly, people are opting for a mobile app for their products and services. As a result, the app store has recently become saturated. Despite the fact that there are many real mobile application development companies, some are imitators. They try to copy the ideas of others and create a new app.

However, intellectual property regulations such as copyright, patents, and trademarks can assist you. The smartest move you can do to guard against piracy of your ideas is to obtain a legitimate patent. A thorough approach to dealing with patent rights for mobile apps and your questions on how to patent an idea has been discussed.

What Does It Mean – Patent A Mobile App Idea?

A patent is a type of intellectual property law that can help you protect your ideas from being exploited by others without your permission. A patent is essential to protect a distinctive app idea against imposters in the market who may try to steal it. But, to be susceptible to patent law, your app idea must be novel and unique. In case if the idea or concept is a clone of any other program, then such effort shall go in vain.

In layman’s terms, a patent is a type of intellectual property legislation that:

Why Should You Patent Your Mobile App Idea?

When you have a unique or new mobile application idea, it works in your interest to patent the idea since there are chances that such an idea can be pirated or copied by any other party, or someone might get it before you do. Furthermore, another thing for consideration is that if you have an official patent, you could use regulations to recompense anyone who uses your idea. Below mentioned are some other reasons as to why you might need to consider patenting your mobile app idea:

What Are Different Types of Patent Applications? 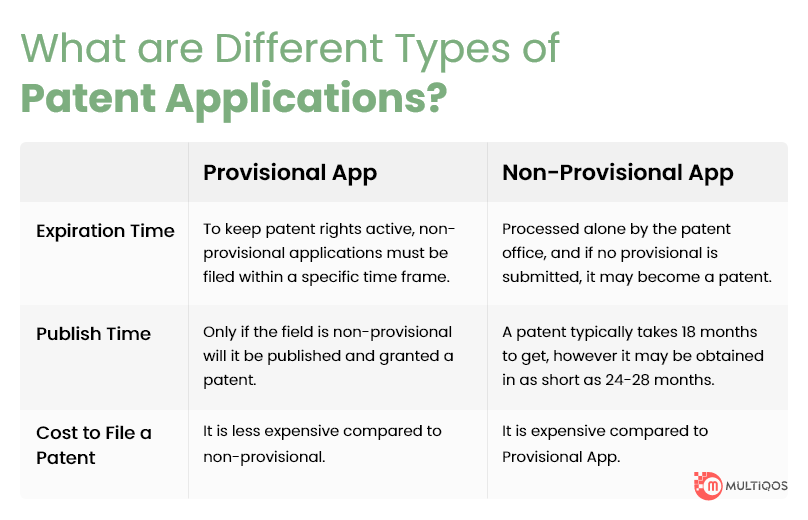 Which Are The Features Of Your Mobile App That You Can Patent?

You do not need to patent the entire app; however, you can even patent some of your app’s features. Among them are:

How Can You Know Your Mobile App Idea Is Patent Eligible?

It Requires to be an Invention:

Patents are used to protect new inventions since they are offered to the invention that is stated as a remedy to every difficulty, according to WIPO (World Intellectual Property Organization). The app process is classified as an invention because the mobile app idea is not a tangible item. Nonetheless, the process, like any other invention, can resolve all issues.

App Idea and Concept should be Unique:

Even though your mobile app idea solves users’ problems, it may not be eligible for a patent. Your app concept should be fresh and unique. The app idea should not have been released or launched publicly on any platform such as Youtube or books, articles, or other sources. The idea should be unique and not already in use; otherwise, patenting it wouldn’t be possible.

The Idea should be Useful:

All your software needs to do is work, at least in principle. This prohibition prevents people from patenting ineffective apps. As a result, to identify your software as an asset, you must write a clear and concrete explanation of how it works.

How Do You Know If Your App Idea Is Patented Or Not?

You’ll never be convinced that your app concept is truly unique and original until either you have proof to back it up. Some several entrepreneurs and dedicated developers are working to develop new unique ideas that are innovative. There’s a reasonable probability they’ve already copyrighted the app concept you’re considering right now.

Start your search on the present or pending application ideas to see whether such a concept is new or has already existed. The USPTO recommends using its Cooperative Patent Classification to do a comprehensive search for related items.

The United States Patent and Trademark Office (USPTO) keeps a comprehensive database of all issued and pending patents; therefore, it would be useful to check this data to see if others have previously patented your application idea.

You can also rely on tutorials that provide step-by-step guides on conducting searches on the existing and pending patent applications. You can use the IPC Catchword Index of the World Intellectual Property Organization for international patents.

Here are some of the steps for understanding how to patent an idea for an app:

Your first step of how to patent an app is you should start with discussing and hiring a software patent attorney if you want to introduce a well-formed strong patent and start getting your patent filing selected, provided they possess relevant years of experience. It is recommended that you hire a professional instead of taking matters into your hand since these revolve around legal processes that can end with lawsuits. However, hiring the very first lawyer, you come across shall also be a foolish decision. Make a thorough investigation and find the most excellent option that meets your budget.

Just because you possess an app idea that doesn’t end things there, you should bring life to that idea to showcase its utility. This shall be one of the quintessential parts of obtaining a patent application. The entire development process of the app idea should be documented since the court demand concrete proof for the app idea or the invention of the concept before the issuance of the patent application. Furthermore, you should also start constructing a prototype of your application to see how it works or functions.

You may also create a prototype of your Mobile Application Development to evaluate its functionality. This will aid your lawyer in assessing your app’s flow, as it is the application operations and capabilities that are patented, not the code. It can brilliantly assess different activities of your application in other sectors and give you a new perspective on what other parts of your app are eligible for patenting.

A patent lawyer is advised to do a full search for applications that are identical to yours and have the same processes or functionalities. In this manner, you can avoid any unexpected breaches from other companies. It is preferable to spend some money and ensure that your patent has the broadest possible scope of approval.

Both provisional and non-provisional patent portfolios can be used for filing a patent application for your mobile app idea. Furthermore, you can even file a provisional application without submitting a formal claim, a data disclosure statement, or a statement. This application type has specific pros and which are:

Non-provisional applications allow you to register without claiming an application filed in the convention country and with no application references in the procedure. This should be accompanied by a comprehensive claim as well as specifics. It should include a detailed invention copy and a claim that shall legally characterize the invention or innovation of that app or concept.

Non-provisional is the most fantastic option for you if your need now is linked to the second criterion mentioned above. If you only need the first, a provisional application will suffice.

The process of submitting a patent application is the last step of patenting the mobile app concept. As soon as you’ve finished drafting a patent application and have it ready, submit it to the USPTO for review. The process of investigation is necessary despite its time-consuming nature that shall require a lot of paperwork. You may need the following documents throughout this procedure:

How Much Does it Cost of Patenting an App Idea?

How Long Time Does it Take to Patent a Mobile App?

The process of patenting an application is not easy work, and it generally consumes a long duration of time, i.e., from several months to years. There are several different aspects that a patent granter takes account of. There might be several rejections also, and sometimes it might take 4-5years.

What Are The Alternatives To App Patent?

Patents make it illegal for someone else to sell or manufacture your idea. On the other hand, a trademark protects words, phrases, logos, symbols, and other devices that help identify the originator’s goods and services by banning other businesses from using them. As a result, you can register a trademark for your app’s logo to prevent rivals from duplicating it and confusing customers.

Copyright, like patents, is a type of intellectual property right that can be used as an alternative idea for a patent. However, a legal phrase helps define the privileges granted to the author or creator of any work, such as artistic, intellectual, musical, educational, or computer programmes. It also allows people to replicate the work, publicize it, build derivatives, and so on, irrespective of whether it is online or not. It also protects the expression of ideas, not just the idea themselves. As a result, you could copyright the app logo but not the app itself since it does not protect ideas, data, operating methods, or systems.

NDA or Non-Disclosure Agreements is a document that is approved by the entities with whom you deal. In most circumstances, it exists for both you and the mobile app development firm. It lawfully obligates them to maintain your application ideas and technical details private. As a result, it prevents outsiders from using the concept.

Our Opinion on How to Patent an App

The benefits and drawbacks of obtaining a patent for a mobile application are both concerning. First, you’re preventing your app idea from pirating or reproducing, but it also requires too much effort. So, according to us, you should not squander valuable resources like effort and cash unless you are certain that your app idea is original, innovative, and offers an entirely new solution to an existing problem. Submitting a patent application for a mobile app can be a time-consuming and tenuous task; however, you can patent your idea from being stolen by any other parties with a little patience.

So, you’ve just finished the basic guide to patenting mobile app ideas, which takes a lot of time and work to complete. Still, if you have any issues or queries, you may contact a mobile app development company, which can answer any inquiries you may have.

FAQ About How to Patent an App Idea

Can you patent an app idea?

Yes, your app idea can be patented. Even before the application is completed and it is indeed a good idea to patent your app concept. After you’ve finished developing the app, you can reveal it.

Is it possible to sell a business a concept without a patent?

Yes, you can sell a business concept even with or without a patent. However, you must sign a non-disclosure agreement (NDA), and if they refuse, you must file a provisional patent application.

Is it necessary for hiring a patent attorney for the purpose of filing a patent?

Yes, you must employ a patent attorney since you may not know all the laws and regulations governing patent application. Even the tiniest mistake may cost a lot of money.

Why do patents have a 20-year life span?

If patents are allowed to live longer, it could become a problem for those who need to build on current technology. That is why patents are only valid for 20 years. While keeping up with progress, modern patent law allows innovators to recoup their income and investment from their invention.