Django Vs. Laravel Vs. Node – Which One is the best Back-End Development Framework in 2023?

Web frameworks are the collection of software packages which makes complicated web development simple and easy. Quite impressively, they feature built-in functionalities which minimize the time needed for development. In… 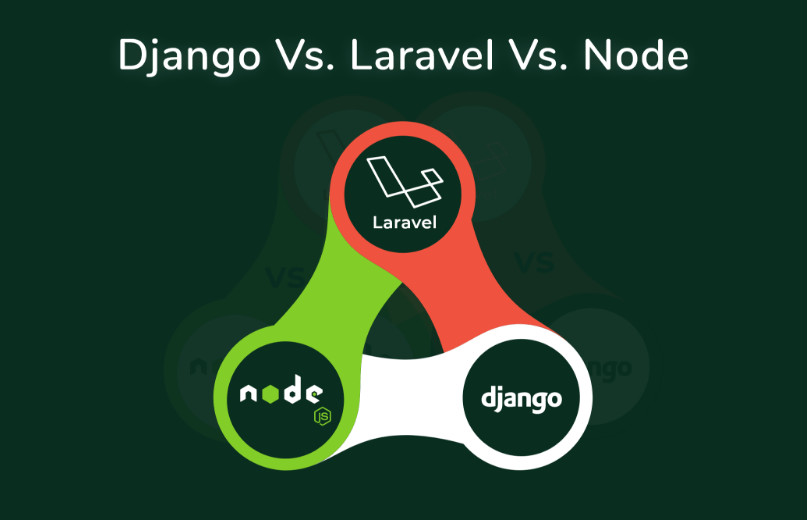 Web frameworks are the collection of software packages which makes complicated web development simple and easy. Quite impressively, they feature built-in functionalities which minimize the time needed for development. In other words, frameworks are ideal if you want to transition from the development phase to the production phase.

But when the context is about the selection of the best framework, it seems that the entire community of developers seems divided. Some feel that Node.js is the best web development framework out there.

A Brief Overview of Django as a Back-End Development Framework

Note that Django is a lightweight web framework based on Python. It first came into existence in 2005. In case you don’t know, Django follows the Model View Template architecture pattern. For many developers out there, Django is one of the most preferred frameworks when working on a complex project.

Various successful startups across the world have deployed Django in the past. Some of the popular names include Mozilla and Facebook. Apart from being lightweight, it is power-packed with stunning functionalities which makes your web development endeavours exciting. So here are some of the pros and cons of using the Django framework for back-end development.

Top Reasons why Developers Select Django for their Project

Here are some of the top reasons why Django is popular among developers.

An Overview of Node.js as a Backend Web Development Framework

Well, Node.js is not only a framework but also a dedicated server. In other words, it is an open-source JavaScript-based runtime environment that plays a vital role in the development of cross-platform applications. One of the key highlights of Node.js is that it comes equipped with event-driven and asynchronous APIs.

And since it operates on a single thread, Node.js has emerged as one of the most popular back-end frameworks for developers. Because its operation is based on a single thread, you don’t need to worry about blocking during execution. Another important attribute of Node.js is that the whole server is based on events. It triggers itself while receiving the callbacks.

Here are some of the advantages of using Node.js that you should be aware of.

One of the key advantages of using Node.js is that it offers easy scalability. As a developer, you can easily augment nodes to the existing system. This would help you to scale applications in both vertical and horizontal directions.

In Node.js, the requests get cached automatically in the memory of the application. This assists the developers to a great extent as they don’t have to re-enter codes. Moreover, caching helps the apps to perform and respond faster.

Always remember that Node.js is one of the most preferred frameworks when the context is about developing high-performance apps. Since Node.js runs on Google’s V8 JavaScript engine, it allows for easy compilation of code directly into the machine.

Node.js is one of those frameworks which provide developers with support for various tools. For instance, you can deploy unit-testing tools for assessing the source code of the applications developed with Node.js.

Reasons why Developers opt for Node.js to Execute Projects

Here are some of the reasons why developers opt for Node.js to execute projects.

When the context is about web development services, Laravel is one of the most preferred frameworks. Though it was released after Django, Laravel has managed to captivate the developers with its wide array of features. These features also simplify the total development process and decrease the overall time needed for development.

It is a commonly accepted fact that developers resort to Laravel whenever they want to develop small or big web apps. But at the same time, if you want to work with Laravel, you should possess great expertise in PHP.

Also, a majority of the apps developed with Laravel are used for content management systems. Laravel is also known as the powerhouse of features which assists in every phase of web development.

Reasons why Developers use Laravel

Node.js vs. Django vs. Laravel

For instance, Node.js works on Chrome’s V8 JavaScript engine. The primary objective of Node.js is to help developers create engaging web apps. Django works on the basis of the MVT pattern based on the Python language. The Laravel framework follows the MVC pattern and allows you to develop CMS web apps.

When the context is about security, Node.js offers you with enhanced features. Note that the Laravel framework is known for facilitating better security when compared to other frameworks. It uses the hashed password methodology for storing every password in the database securely. Django also alerts the developers of errors in codes during the developmental phase.

As you can see, each framework has its fair share of limitations and advantages. When the context is about selecting the best frameworks, you should first assess the requirements of your project. With a thorough analysis, you would be able to come to a solid conclusion. But note that all these three frameworks are great in their own right.

The framework chosen is determined by the project’s requirements and long-term objectives. You might approach a competent Node.js Development Company if you have a unique idea. If you choose to work with us, you can rest assured that you will receive the greatest web application possible.

The truth is that there is no clear answer to the question, “Which is better: Django or Laravel or Node.js?” because they all have a variety of advanced tools.

As a result, depending on your project’s needs, you can you can hire Node.js developers, hire Django developers or hire Laravel developers.