Introduction In today's world, developing a good mobile app means taking into account a wide range of user preferences. It's critical to deliver excellent work rapidly, with strong security and… 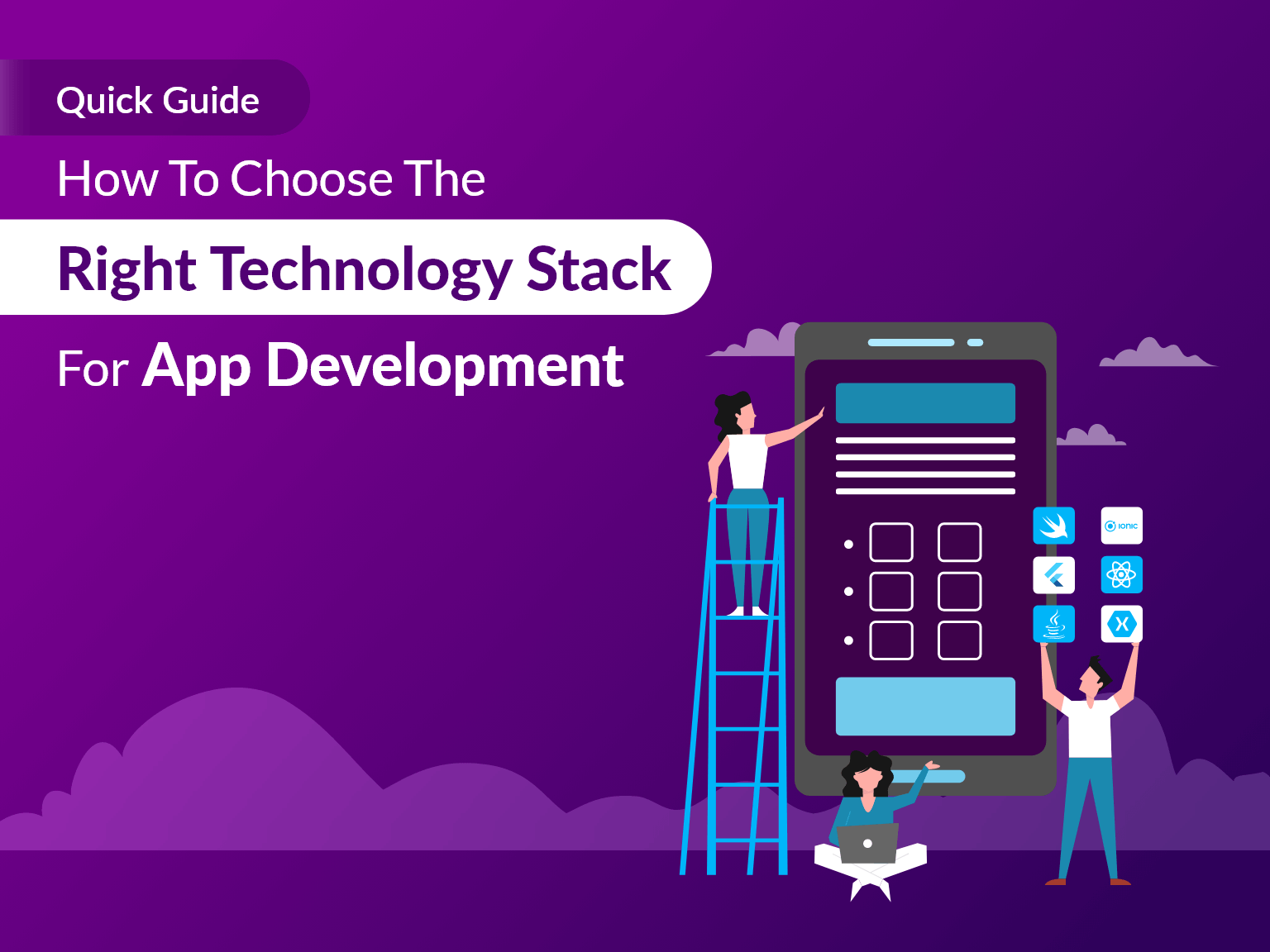 In today’s world, developing a good mobile app means taking into account a wide range of user preferences. It’s critical to deliver excellent work rapidly, with strong security and an appealing interface which are made possible by choosing a suitable technology stack. It allows us to cut our app development costs, save time, open up new opportunities, and make future project enhancement easier and more flexible. While the clients would normally look for fast-loading applications with more excellent performance, the area of tech stack can be generally overlooked. However, it is crucial to remember that the supporting technology behind the development process has a significant impact on the final performance of the application. Defining and selecting the technological stack for app development early on makes it much easier for businesses and companies to attain their final company goals without facing any potential technological hurdles on their way.

What Is a Mobile Development Technology Stack?

A technology stack is one of the quintessential elements of developing any application on mobile or web platforms. Further, a technology stack is defined as the combination of the tools, programming languages, software, frameworks, techniques, and other associated technology behind the developmental project. For instance: The programming languages of Redis, Python, JavaScript, Django, Java, PostgreSQL, and React were used to develop the social media site Instagram.

An appropriate technological stack can aid in developing mobile apps and the creation of a demand for them. The technology stack energizes app development efforts. It also ensures that they are scalable, dedicated, and simple to manage. Furthermore, deciding on the right Mobile app technology stack can ensure that the project shall be more gratifying and effective.

The major components of the technology stack are:

Why Is It Important to Find Proper Tech Stack for Mobile App?

You must choose a proper technology stack for app development after proper consideration since it defines the characteristics of the application you develop. It can be considered the determining factor to state the program’s stability, whether the characteristics are good, or if it can be scaled on different versions of various operating platforms. Deciding on anything besides the optimal technological stack will have a negative impact on the app’s instant performance. It can potentially hamper the future growth of the application in a competitive market. While marketing and costing issues can be the most obvious ones associated with android app development company in USA or iOS app development company in USA, however with a wrong technology stack choice, you can face severe deep-rooted issues either instantly or in the long run.

You can make use of the following iOS app stack for iOS app development:

The main iOS app development language is Objective-C, suitable for handling complicated operations and utilized when the project is extremely vast and requires a huge development team of highly qualified engineers. Because of its dynamic execution environment and entity characteristics, Objective-C, a superset of the C programming language, has acquired significant adoption.

Xcode is an open-source development model that has been integrated with Cocoa Touch and the Cocoa frameworks. Objective-C programming may be done using a set of included developer tools. The Xcode software package includes a compiler, a text editor, and a build system that allows iOS app developers to compile, debug and submit applications to the Apple app store straight.

Swift is an open-source and lightweight language used by iOS mobile app Development Company which can significantly ease project development. Swift has dynamic libraries that are loaded straight into memory, improving app performance while reducing the app’s original state. Furthermore, it even allows hire iOS app developers to reuse code for safety and security, convenience and cost-effectiveness. In contrast to Objective-C, which has the inline capability for manipulating data and text strings, the likelihood of developers making errors decreases.

You can make use of the following Android app stack to create a native app for the Android OS:

Java is a popular programming language used by almost all Android app developers for website and application development. This free and open-source programming language is well-known for its extensive set of tools and libraries. Java is also known for its scalability and ability to tackle difficult jobs. Java, on the other hand, is memory-intensive and painfully sluggish.

Kotlin is a widely-used programming language used by top app development company in usa for the purpose of android app development. Server-side applications are the primary focus of its utilisation. The major benefit of Kotlin is that classes require less coding. Among the most popular procedures in Android development, findViewByIds is an instance where Kotlin may dramatically minimize the total amount of coding.

We’ve created a collection of the most often utilised basic stacks.

Flutter is a cross-platform development tool sponsored by Google. It’s developed on the Dart programming language and offers smooth and rapid operation and performance due to its built-in widgets. However, Flutter Mobile App Development is quite new for flutter developers, and there are chances that it might lack certain functions.

Using JavaScript or TypeScript as its foundation, the React Native framework makes it easy to create mobile apps. This tool makes use of the same UI-building pieces as Android and iOS. React Native has a simple interface, quick and easy mistake detection, and a lot of capability.

In Xamarin, the C# programming language is widely utilised. Xamarin framework enables immediate direct access to both operating systems’ native APIs as well as the usage of an open-source and comprehensive toolkit. This platform, unlike the others, provides limited free function and certain paid-for features.

Also Read: Why Should Startups Use Flutter for Cross-Platform App Development?

This aids in cross-platform app development, and the main strength is Apache Cordova, whereas PhoneGap gives you access to the smartphone or the device’s hardware. Developers also don’t have to rely entirely on CSS or HTML because they may use libraries such as Knockout.js, jQuery, and Angular.js.

Ionic is a great tool for creating hybrid mobile apps that use web technologies like CSS and HTML5. It’s a fantastic platform for designing largely interactive apps with various features and services. Ionic includes an extensive library of components and utilities that are mobile-friendly. Developers may spend less time designing apps thanks to Ionic’s cross-platform features.

This powerful framework combines the most significant features of JavaScript, ExtJS, and HTML, making it an excellent choice for creating complex hybrid software with an interactive UI similar to native apps.

How to Select the Best Tech Stack for Mobile App Development?

With so many app development tools, stacks, and platforms available on the web portal, it may appear tough to make the best choice. The following are some of the most important considerations to keep in mind while deciding on a technological stack:

Requirements of the App:

Every mobile application is unique and thus has its requirements. Further, it also depends on how many operating platforms the app shall run on. Concretize all objectives, select the appropriate target platform, and determine the major characteristics of the future app while developing the overall app concept. For example, an app’s function, user interface, network circumstances, market time, and platform.

When choosing a technological stack at that moment, keep in mind that the app’s eventual aim will be crucial. This indicates that the mobile app uses loaded computing and does not necessitate a much more robust technology stack. If your app is dependent on precision, efficiency, and interaction. Then a more advanced technical solution may be required.

Before beginning the project, it is vital to validate the idea for its uniqueness. This might assist you in making the best selection for increasing potential client interaction without going over the cost of mobile application development.

Identify Skillets Within the Company:

Whereas various frameworks and languages produce comparable outcomes, they may differ for various reasons. As a result, if someone has to pick between two techniques that are comparable to one another. Then the best choice is to go with the developer’s strong suit. The project development process will be speedier as a result of this, and the performance will enhance.

Everyone wants to be ensured that their information is secure, and even the tiniest data breach can erode a user’s trust and, as a result, harm a company’s brand. This is why selecting the optimal technology stack is critical in ensuring the product’s success.

Timelines and budgets are essential considerations. Different functionality might impact the project’s kind, cost, and time to completion. Consider all of the needs and eliminate any unnecessary features. This will expedite program creation and cut down on wasteful spending.

Programs that operate across several platforms are in high demand. Instead of an application that operates on a single platform, this is a platform-agnostic approach. The technological stacks for these two kinds of applications are distinct. Every platform has a different set of toolset requirements. However, cross-platform app development ensures the easy and efficient operation of applications on various platforms.

Selecting the right technology stack for an app development project is critical and must be done with attention. The technology combination you pick for developing apps has a significant impact on whether your app will be reliable and robust or able to grow to different operating system versions. When you’re starting a project and need to deal with the tech stack, make an informed decision after evaluating all of the considerations. You can choose the required tech stack or decide on a full-stack mobile application development services in USA according to your requirements. You must also consider the development team’s experience as well as your development objectives. The tech stack will impact the app’s functionality and stability as well as consumer retention.

The mobile app technology stack determines the performance of the entire design, implementation, and maintenance process. A bad selection here could lead to your app’s downfall in the market far sooner than it would otherwise.

Languages, APIs, frameworks and tools make up the technological stack, which is used to create software.

There are several aspects to consider when determining which mobile app stack will best suit your needs, such as: