Overview With the deployment of IoT, the business environment is changing (Internet of Things). There is a large quantity of data being collected from a variety of sources thanks to… 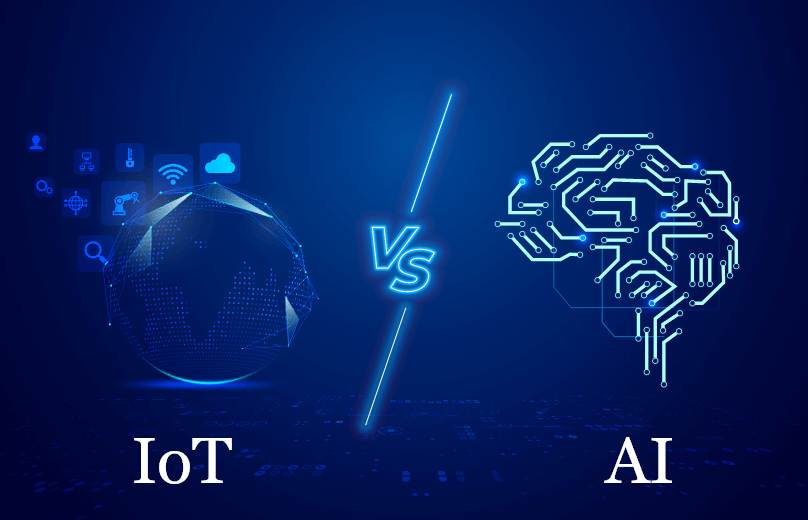 With the deployment of IoT, the business environment is changing (Internet of Things). There is a large quantity of data being collected from a variety of sources thanks to the Internet of Things (IoT). Both IoT and AI are the two phenomena of Mobile App Development that have made a name for themselves in recent years with the increasing popularity of smart technologies. While Artificial intelligence (AI) is the process of imbuing robots with intelligence and rendering them as smart and as sophisticated as humans, the concepts of the Internet of Things (IoT) involve connecting all electronic gadgets to a single, interconnected network.

What is the Internet of Things (IoT)?

IoT, or the internet of things, is a recent development in computer science. IoT can be defined as an ecosystem where electronic devices are linked to any single network through wireless connectivity and the internet. All linked devices can communicate data via integrated intelligent technology that aids in the creation of smart gadgets as well as other applications such as wearable technology, smart buildings, and smart homes.

Internet of Things functions by sending, collecting and responding to data collected from the environment utilizing inbuilt or integrated components such as CPUs, communication hardware, and detectors. Through an IoT gateway, IoT devices communicate by transferring sensor data collected by them. Furthermore, IoT Application Development aims at making the devices communicate with one another and behave in response to information acquired from other connected devices.

Also Read : Complete Guide: How to Develop an IoT Application

What is Artificial Intelligence (AI)?

Communication, persuasion, perceiving, thinking, analyzing, learning, and responding in complicated situations are all examples of intelligent activity. AI also comprises scientific and engineering objectives. Furthermore, AI technology also contains automated industrial processes to provide more efficient and productive results. It has also made it easier for computers and machines to collaborate and work with each other effectively. Over the years, artificial intelligence is being implemented in production and marketing, sales, customer care, and research and technology.

Reduces efficiency of Humans: AI apps replace the majority of slow and tedious work, making humans lazy. With no need to recollect information in order to solve problems, people might become lazy and hence lose their productivity.

AI vs IoT: Know the Difference Between AI and IoT

When To Combine AI & IoT?

The Internet of Things is all about linked sensors and the data they produce. This allows you a tremendous level of freedom in day-to-day activities. Target consumers in the business and household sectors, in particular, benefit from AIoT. Despite the fact that AI and the Internet of Things are still in their developmental stage, these two technologies are currently being used in scenarios where data and problem-solving may improve results for all users.

What are the benefits of AIoT?

Proactive intervention, personalised experiences, and automation are just a few of the benefits that AI in the Internet of Things offers organisations and customers. Combining these two new technologies can bring about a wide range of business benefits, among them the following:

How Does MultiQoS Help in the Creation of High-End AI and IoT Apps?

MultiQoS is the best place for all your IoT and AI-related solutions. We provide Artificial Intelligence (AI) and Internet of Things (IoT) services that provide organizations with end-to-end AI and IoT solutions while effectively blending them within their current corporate structure. AI and IoT Mobile Application Development is a specialty of our Mobile App Developer. Further, we assist you in developing creative and dependable AI and IoT apps for future technology and new opportunities. We also offer artificial intelligence and Internet of Things integration to improve efficiencies and avoid costly unplanned downtime.

The distinction between the concepts of the Internet of Things and Artificial Intelligence has narrowed down with the passage of time and the development of more advanced technologies; however, the distinction still prevails. Consequently, the Internet of Things (IoT) is a vast network of internet-connected computer gadgets. These devices can sense, accumulate, and transmit data via a network without any need for human intervention. However, the concept and functions of AI can be associated with building smart, machine intelligence that can respond and interact like people, with sensory, actuation, storage systems, and processing capabilities, which your iOS or Android App Developer can accomplish.

Many well-established businesses are pouring money into AI and IoT technology to improve their operations. These technologies are used by well-known companies like Google, Amazon, and Netflix.

Both IoT and AI have significant contributions towards Mobile Application Development. They are being used in a plethora of areas such as automated cutting machines, personal assistants in our smartphones, or PCs, Self-driving cars, or smart devices such as Alexa or Siri.

Generally, your dedicated development team should be well versed with the programming languages of Java, Python, Golang, and C.