Overview Everyone who invests in a top app development company in USA wants their application to succeed, thereby garnering millions of downloads. Unfortunately, only a handful of people can successfully… 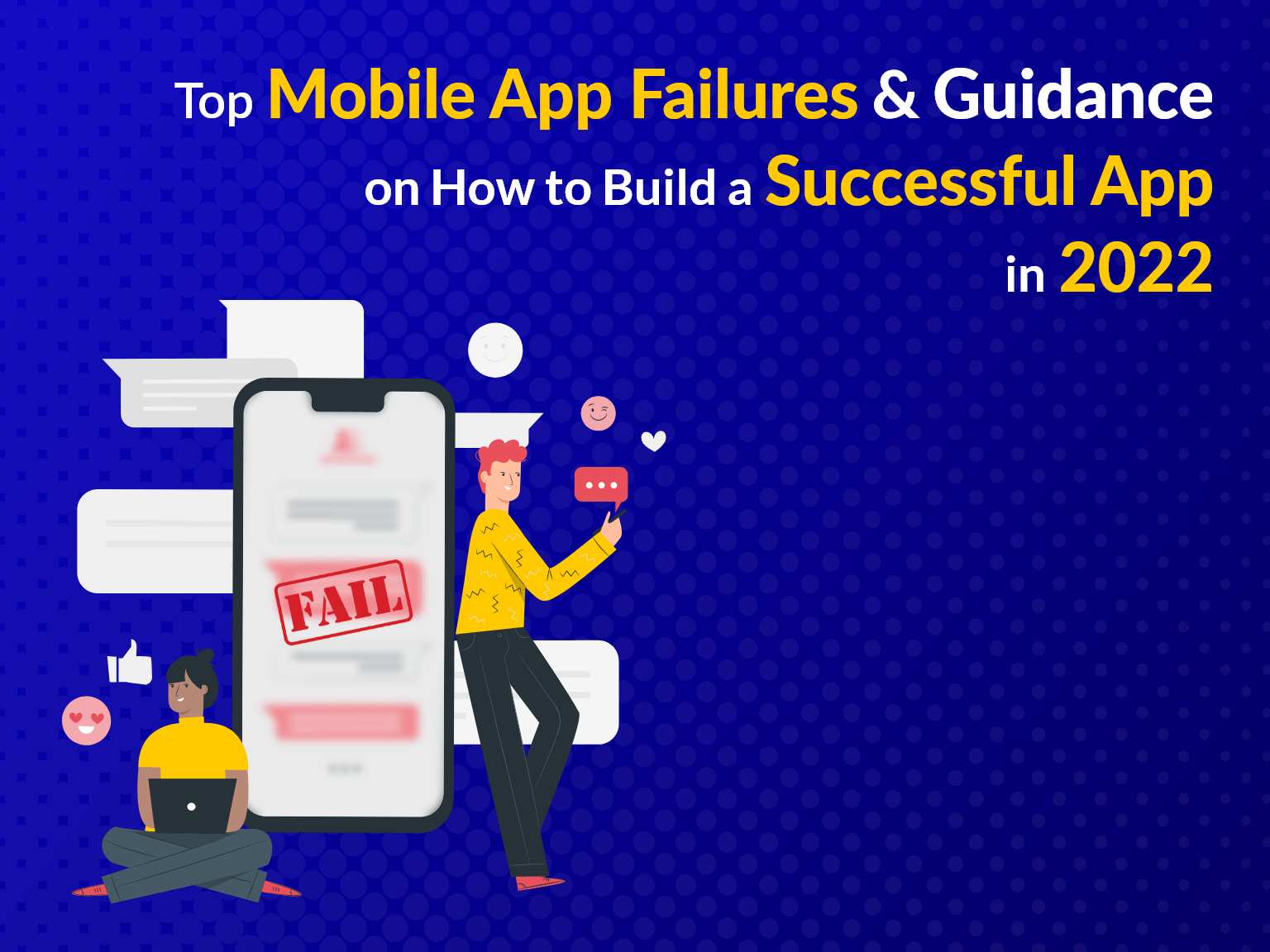 Everyone who invests in a top app development company in USA wants their application to succeed, thereby garnering millions of downloads. Unfortunately, only a handful of people can successfully achieve this because millions of applications fail despite the developer’s and owners’ efforts and strategies. Any application failure can be attributed to several factors starting from planning to implementing the application. The issue can lie anywhere, and it could be due to bad application ideas and strategies or lack of monetization or poor execution, or others. Statistics state that nearly 30% of the mobile applications fail within the 1st 12-18 months of their release in the market. Furthermore, after the first week of the availability of the application, more than 60% of mobile apps on the Google Plays Store witnessed an 80% drop in downloads.

However, the worst part of the failure is that thousands of dollars of the money goes down the drain and the investors suffer losses. If you’re developing a mobile app right now, you should be prepared to face any peculiar situations. When it comes to launching a mobile app, things don’t always go as planned since you’ll experience several hurdles along the journey, and things can go wrong at any point in the development stage. To give you a better perspective of mobile app failure, we would go over the common mistakes and the way out to create a successful app.

Mobile Apps That Failed & What to Learn from Their Mistakes

Some of the major ground-breaking failures of mobile applications in history and what you should learn from the mistakes that they committed are:

Vine was a video-sharing program like Instagram that allowed users to create and share video segments. While Instagram was not the sole cause of Vine’s failure in the market, it did play a significant role. As the number of downloads and users significantly fell, so did the number of advertisers and marketers who had believed Vine to be a worthwhile investment.

An unsustainable business strategy and a failure to change and fight with rival apps were among the other difficulties. When launching an app, make sure you thoroughly investigate and comprehend your product-market fit. Ensure to have a plan for how you can keep users satisfied with your app and get them to spend more time with it.

Yik Yak was another famous application that lacked a business plan or a clear grasp of its product or market fit at the time. The confidentiality that drew users to the program in the first place later led to severe concerns about cyberbullying, threats, and abuse. The app was misused, and anonymous threats were spread, leading to schools and institutions banning it. After barely four years, user growth stagnated, staff lost their jobs, and the app was shut down.

There always will be competitiveness; however, there are a few key components to success: recognizing and accepting change. Users’ requirements may change as technology advances, and it is a requirement that you keep up with the changing user needs.

Whilst the mobile application is still available in Europe, it was a disappointment in North America, especially when it first launched in New York City. The major fault of the application was to consider the target audience of New York and London to be similar since cabs are regarded as a luxury in London while it is quite common in New York. It didn’t help that Uber had already begun in 2011 and was on its way to becoming the market leader.

Although it may appear to be common knowledge, no two users are the same. This similar concept also applies to the market, and you should conduct in-depth research rather than basing your choices on assumptions. You may have a fantastic idea, but you must work hard to make it a reality.

Reckless leadership, inadequate market research, and a paucity of marketing are just a few examples as to why the app was a huge failure. The company had the tremendous ability and capability to be a helpful payment service. Furthermore, customers were left out of the loop when Pay by Touch filed for bankruptcy.

An app’s failure has never been due to a single factor. Even yet, one thing is clear: great leadership should never be undervalued in any organisation. Don’t be scared to invest in management and colleagues who can think beyond the box.

Quixey was created to help people find content on their smartphones and tablets in other applications. Upon investing about $80 million, Alibaba thus became the app’s largest shareholder, but the company was eventually the app’s downfall as Quixey had outperformed. When Alibaba declined to finance any further, the bulk of the Quixey team was fired, and the company was shut down. The software failed to earn a significant amount of revenue in the end.

Quixey’s demise was owing to its inability to pay its debts. It also failed to generate enough income from its goods to keep it afloat. However, the takeaway is that getting into debt and being dependant on third-party companies can sink a new app trying to break into the app market.

Also Read: How to Choosing The Right Tech Stack For A Mobile App

Mistakes to Avoid When Developing Your App

Some of the common mistakes by iOS and Android App Developers while developing mobile apps are:

Developing a similar application to your competitor wouldn’t provide you success. The first step in maximising customer loyalty and overall profitability is establishing a unique value proposition (UVP), which should be a new and unique idea. You should be able to provide something new to the customers. Having a proper vision for developing your application would provide you with more weightage and an idea of how to go. However, your vision should be unique and new.

Failure to Choose the Appropriate Platform:

The interface principles for iOS and Android (and other operating platforms) are extremely user-friendly. They work in various ways and appeal to various user groups. You need to conduct market research to understand the needs of your target audience and then choose the appropriate platform to launch the app. This data may shape your choices regarding the item’s marketing approach on its own. It will be hard to design an application that serves the specific demands of your target user community if you don’t have a comprehensive understanding of how customer behavior varies with the change in the operating system.

Several mobile application development services companies use third-party frameworks to accelerate the development and leverage the experience of other developers into their mobile applications. However, integrating additional app developers’ code causes a slew of issues. Unnecessary functionality is frequently found in programming libraries. Another significant issue with third-party libraries is introducing a new vulnerability vector. Furthermore, several Mobile App developers use ad libraries to supplement their earnings from their applications.

Further, another issue that mobile app development services in USA face is the lack of a secure project cycle, which incorporates security assessment and software testing into the project development. Along with the complexities inherent in the development cycle for smartphone apps, code must be developed, generated, and delivered to a third party for vetting—security-oriented development is particularly critical. The majority of mobile app security issues stem from programmers’ lack of understanding of the security implications of particular development practices. The most vulnerable mobile app developers who fail to secure their code naively trust third-party libraries and do not incorporate security into their development cycle.

You should provide an application with seamless service that shouldn’t irritate the users and rather provide them all solutions easily. This shall help improve the user experience since poor user experience can lead to the downfall of your application.

How to Build a Successful App?

If you plan on developing an application, then a few steps should be considered, which shall significantly reduce your chances of failing in the market.

Apps are developed for the users and thus, while you plan on developing an application. Narrow down your search to identify the user personas and plan strategies to promote them. Take account of your target audience and their age, income, occupation, industry, location, thereby having a user demographic for easy planning of your app features.

The best way to verify the idea of your app is to ensure that the app is capable of providing unquestionable value to the users. If the app doesn’t solve their problems immediately, you might need to reconsider your idea. Moreover, there are no reasons as to why a user should continue using your app if it fails to provide the required needs and fulfill its purpose.

With the widespread development of the technology, the market is more competitive than ever before, and thus, it is essential that before you plan on developing an app, it is essential that you conduct market research. Analyze your rivals’ products and tactics to gain a competitive advantage. Maybe your rivals lack the crucial functionality your users require or don’t focus on a particular user demographic. You may find a solution out of this situation with the aid of investigation.

You need professional expertise when you plan on developing an application and what’s better than hiring flutter application development services. They can help you develop a high-quality application and launch it effectively in the market. They can assist you in quickly running through your concept, consolidating features, and laying out a commercial strategy. Hiring a developer can help you get your concept off the ground quickly in relation to technical viability, product promotion, and development cost.

Your application will have to be evaluated for accessibility, compatibility, privacy, interface, efficiency, and durability. Your application will be put through a series of technological tests by your design team to see how it reacts to abuse and odd instructions. In case they find any issues, they would work towards solving them.

The success of an app is determined by various factors, including competition, advertising budgets, and pure luck. However, inadequate research and procedure execution are two more major reasons mobile applications can drastically fail in the market. There is no one-size-fits-all approach to developing the ideal app since every app’s developmental stage shall witness certain technological issues.  However, to succeed in a highly competitive market, you need to start with research, recognise your target audience and know their needs and demands, and start with your research, which shall help your app stand out. Your sole focus should be on improving user experience and customer experience. Be sure to learn from the blunders listed above and be ready to confront any obstacle that comes your way.

FAQ on How to Create a Successful App

It’s not usually the case, but when it is, it may be quite advantageous. For starters, it creates the appearance that you are a skilled programmer. This is critical for creating positive first impressions and acquiring users over time.

Various causes cause mobile app crashes, according to research, including:

Many elements influence the success of a product launch and some needs, which may cause the organization to take longer to create than others.