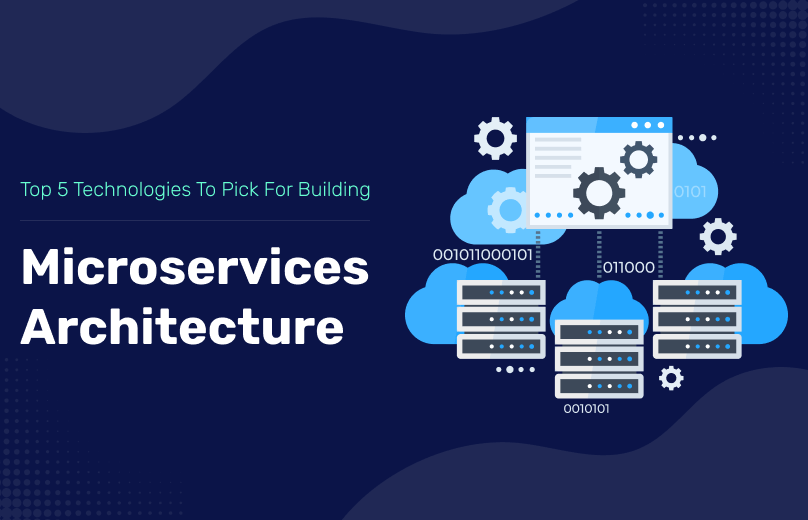 One of the most significant software architectural trends in microservices development.  An application is organized as a series of loosely connected services in a microservices architecture. A microservice is a self-contained part of the business with a well-defined interface. Microservices make it easier to maintain an application because they are composed of separately developed components.

Companies and businesses are aspiring to implement the Microservice architecture, on the other hand, face the most difficulty in selecting the appropriate tools and technology. Let us delve deeper into the 5 best technologies businesses and companies and pick for building microservices architecture development.

What Is Microservices Architecture?

Microservices architecture can be defined as a development paradigm that allows you to break down a single program into multiple smaller services. Each of them operates in its processes and interacts through lightweight mechanisms. Microservices are built around business functions and can be deployed independently using an automated deployment method.

Microservices Architecture requires very little management of these services, which are written in various programming languages and use a variety of data storage systems. The goal of microservices architecture is to simplify the deployment process and produce cloud-ready, high-end software quickly. You may create an application that is simpler to scale, alter, and deploy by breaking it into smaller parts.

Reasons To Migrate To Microservices Architecture

While it cannot be negated that microservices provide several advantages for larger products for a large number of developers engaged in them, monoliths are frequently used for smaller projects. Having a single code base puts the monoliths in a better position where they are less expensive to develop and launch. Thus, the step of migration should be a well-thought option for the business where it should take account of the demands and requirements of the company.

Some of the reasons why the businesses need to migrate to microservice architecture are:

There are a plethora of advantages that have been tempting companies to shift from the regular monolithic structure to the advanced microservices.

Criteria For Choosing A Technology For Microservices

Also Read : How to Find Your Iphone Serial Number, UDID, or Other Important Information

Microservices can be deployed using a variety of tools, platforms, and versions and some of which are:

What To Consider Before Adopting Microservices Architecture

Here is a list of the best language for microservices are:

Also Read : How to Build & Launch your own NFT Marketplace and How Much Does It Cost?

Alongside large corporations, numerous small and medium-sized businesses and enterprises are shifting towards developing complex applications, intending to migrate from monolithic systems to a single independent Microservice architecture. Choosing the right technology and languages for your microservices is difficult. After all, the tool you choose to create distinct app pieces determines the technology you use. Furthermore, the knowledge of your employees is crucial. If you’ve decided to go the microservices route, you’ll need to find a trustworthy partner to help you accomplish your project.

Contact us right away if you’re considering using microservices and need a dependable technology partner. Our highly qualified team is skilled at creating custom development that meets your specific needs.