Flutter Vs React Native Vs Xamarin – Which is Better for Cross-Platform App Development? 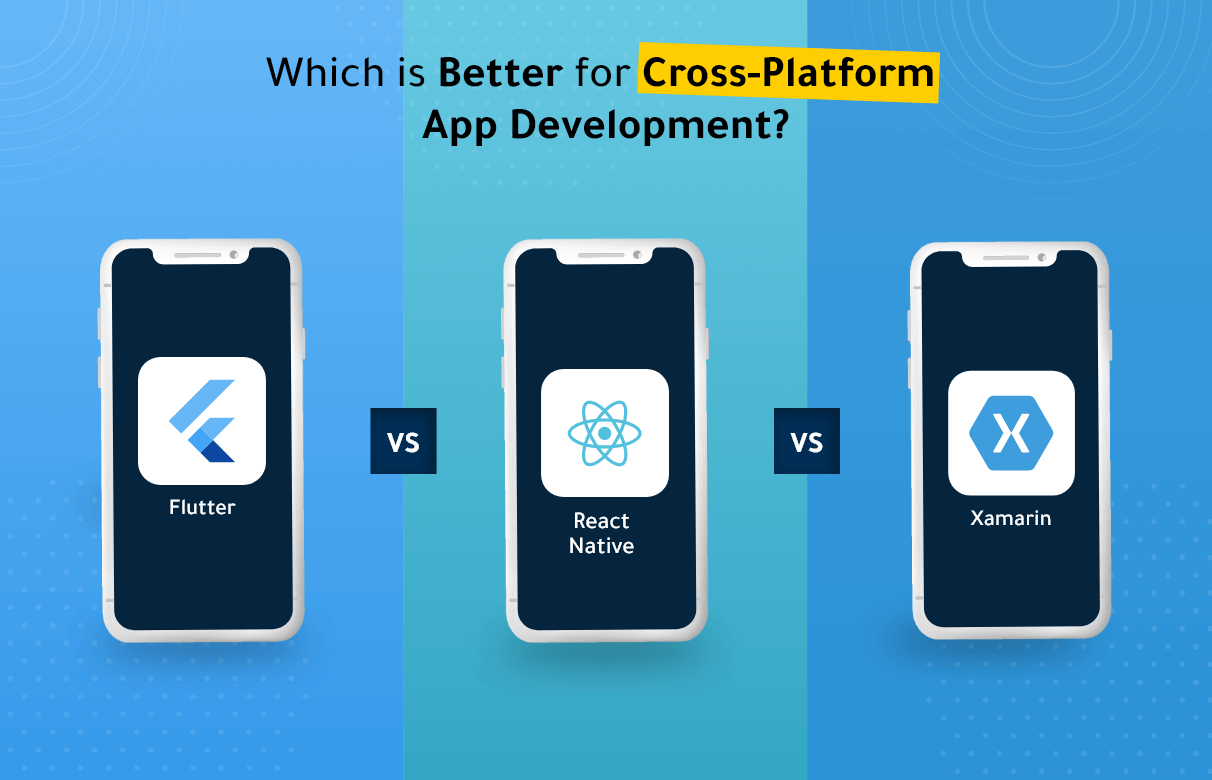 Cross-platform mobile app development frameworks enable the streamlined functioning of the same code across multiple platforms. This also aids in the easier development of mobile applications for various platforms such as Android or iOS using a single technological stack. A single technological stack enables you to write the code once and subsequently release it on multiple platforms at a time, and you wouldn’t have to waste your time developing individual versions of code for various platforms. Furthermore, you can also maintain a similar experience, appearance, and aesthetic on all the platforms using a single common codebase. By employing this development approach, one can decrease development costs and time in half while also freeing up resources for different teams’ needs.

There are a plethora of reasons why crossplatform mobile app development is seen in a bad light. This can be blamed on the lack of adequate technologies until recently, which brought a negative remark. They constrained developers’ options and significantly impacted performance metrics to the point where the costs of cross-platform development were no more justified. Albeit such disadvantages, several continue to choose Cross-Platform Mobile Development over Native development still, and some of these compelling reasons are:

Let us now look at the attributes of the individual platforms and compare them.

About 1.6 million Xamarin developers work in 120 countries worldwide, making it a popular cross-platform framework.  React Native Framework is in a better situation, as evidenced by its consistent escalation in the user base over the past few years regarding the topic of popularity. On the other hand, the platform of Flutter is user-friendly and is one of the most popular frameworks, with 75.4 percent of users using it, while React Native is used by 62.5 percent of users worldwide.

Flutter: Flutter, which leverages Dart for mobile application frameworks for iOS and mobile application frameworks for Android, is the way to go if you want to build high-quality apps. Dart is a Programming language founded on C/C++ and Java and includes a multitude of features. Developers utilize Flutter to create a variety of apps owing to Dart.

Xamarin: In the case of Xamarin vs React Native, Xamarin mixes the finest of C# and.Net to create Android, iOS, and Mac apps. A developer can use C# and Xamarin to develop functionality that would otherwise require native languages. Furthermore, the developers cannot use the native open-source libraries for Android, iOS, or Xamarin. To achieve such criterion, the developers may employ a variety of .Net libraries and then fill those gaps.

Also Recommended : How to create your web app using flutter for web? 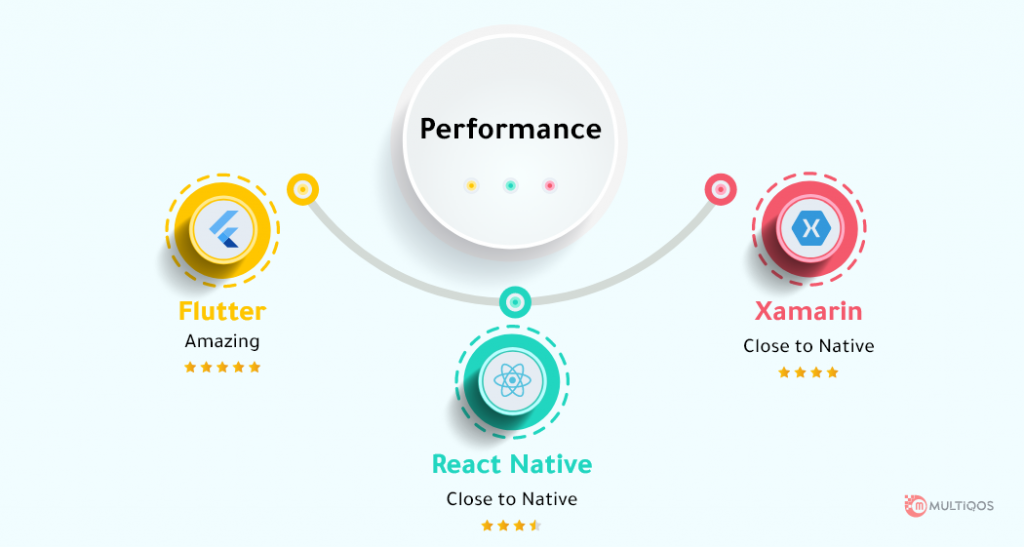 Flutter: Flutter has outstanding performance just because the Dart code of Flutter is arranged above the C library, progressing it like Native code. It has the effect of flattering the speed with which information is exchanged and shows a high-level performance.

React Native: React Native has a high-performing Native mobile development framework since it enables the easy meeting of design expectations. Since they rely on the Javascript bridge, React Native-based apps have a hard time rendering huge datasets. As a result, while using third-party frameworks to expedite your application is a viable alternative, it isn’t enough to beat Flutter in a close contest. React Native’s performance is similar to that of the native mobile applications, and thus, making it quite a popular choice for creating high-performance applications that native appearance.

Xamarin: Xamarin, like React Native, provides a Native mobile development framework that is powerful and efficient. Furthermore, Xamarin can leverage all indigenous and newest APIs to take advantage of the hidden potential in Xamarin apps like ARKit for iOS and Android-Multi Windows.

Flutter: Flutter architecture supports Reactive UI, and it comes with a Dart application framework with the unidirectional data flow. The programmers may become frustrated due to the big size of the Flutter app. Even if the app’s size is reduced, it is still larger when compared with the other platforms.

React Native: Web apps built using flux are known as client-side web applications since they are built on top of the React Native framework. The frameworks of almost all applications use the Model View control framework or the MVC. Developers may alter an existing program thanks to the module’s straightforward nature.

Xamarin: The Xamarin architecture includes a visual designing platform for creating native apps. The MVC and MVVM or the Model–View–ViewModel architecture used by Xamarin speeds up the application development process by reducing the diameter. 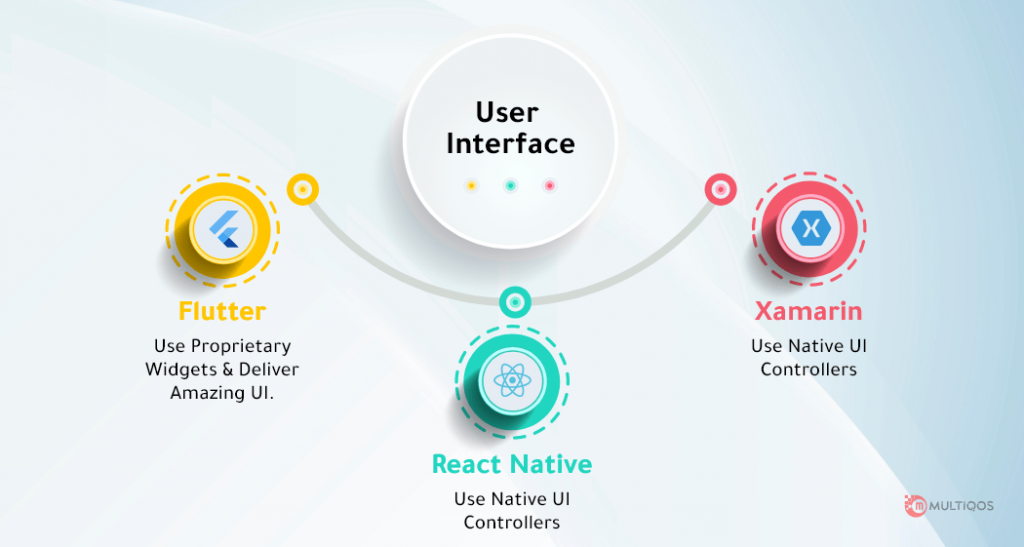 Flutter: Flutter is well-known for offering the best user interface compared to other platforms. When it comes to Flutter vs, React Native, both Flutter and React Native offer incredible productivity and effectiveness.

Xamarin: Xamarin.Forms or Xamarin.Android/iOS can be used to create the user interface. The latter method takes a long time but provides a user experience that is comparable to that of native applications. The project development becomes simpler and takes less time if you utilize Xamarin.Forms. However, this progress does not ensure that the app will have the same look and feel as native apps.

Flutter: Flutter is well-known for its active community. On the platform of GitHub, the framework has 82.4k stars (almost as many as React Native) and 502 contributors. They focus on many aspects of Flutter to deliver the greatest development possible experiences. Needless to say, the designers and the developers for Flutter are also active on QA forums and websites.

React Native: React Native was developed due to the developer industry’s desire for a mobile alternate option that would combine great Mobile app development services with a robust and flexible React Native App Development environment.

The React Native community is massive and active. GitHub boasts 90.5k stars and has 3,000+ developers working on improving React Native. This framework has a vast developer community throughout the world that can help answer questions on any website and forums.

Xamarin: Since the platform of Xamarin is generally not free for the users, and they must acquire this cross-app platform, Xamarin has the smallest community support feature of the top three Cross-platform mobile development platforms. It appears that the community isn’t all that interested in helping. Moreover, on the internet, the Xamarin users do not have immediate access to help or assistance, and thus, it can be indicated that the number of repositories, users, and developers are far less than the React Native community.

Also Recommended : Flutter vs Ionic: which one should you choose for your next project?

Flutter: Developers can rewrite code parts that need to be modified to fit the platform while using Flutter. This improves the effectiveness and suitability of code reuse, and Flutter becomes particularly conducive to code reuse, enabling it a speedier and more efficient paradigm. Furthermore, code exchange is limited to iOS and Android in Flutter.

React Native: In React Native, the developers can create the code for one time and transfer it anywhere and to multiple platforms. Unfortunately, that implies they must constantly determine what platform they are using and install a different element or feature set based on the platform they choose. Only a few major components can be shared between platforms; the remaining must be built from scratch for every forum.

Xamarin: By leveraging the language, Xamarin allows the developers to reuse up to 96% of existing C# code. Additionally, Xamarin also includes form elements, making it superior for reusable components than React Native and Flutter platforms, which share 60–90% of their code. 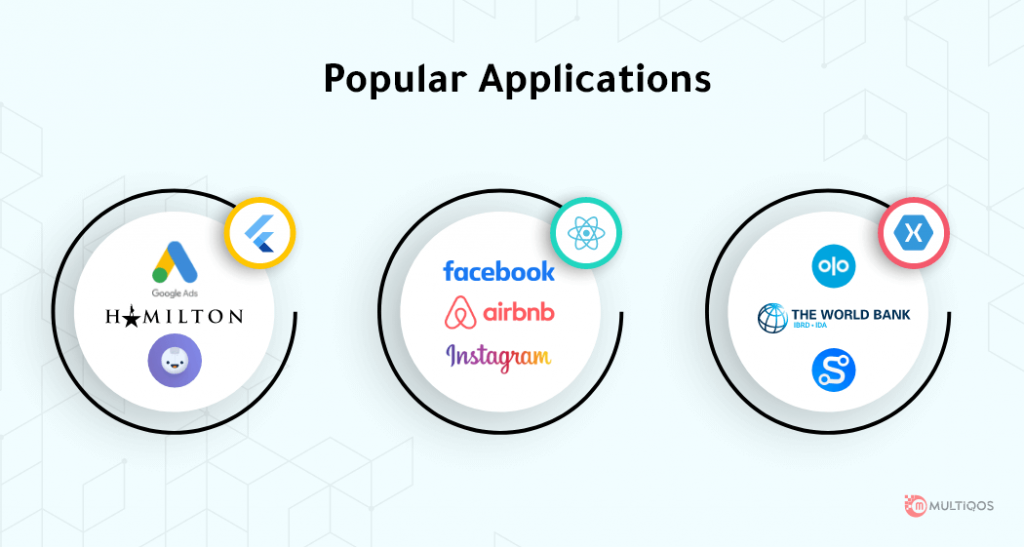 Flutter has demonstrated superior application performance, although React-Native and Xamarin seem to be dominating in the other areas. There is no such thing as the only best option when it comes to choosing the best platform during mobile app development platform comparison.  The React Native, Flutter, and Xamarin Frameworks can produce high-quality mobile applications.

Flutter Mobile App Development is a quick and efficient process; though Xamarin and React Native perform much better, Flutter is a little slower as compared to them. The pace of the application is mostly determined by its operations, functionality, development process, and other factors. Finally, the choice of a cross-platform framework is governed by the particular demands and preferences of that specific project. It’s difficult to choose one cross-platform framework over another, and this may be understood by weighing the number of advantages and disadvantages against the demonstrated benefits of producing and using apps.

Develop a Cross-Platform Application with MultiQoS

Suppose you want assistance with Hybrid App Developer or Cross-platform mobile app developer. In that case, MultiQos can assist you in assembling a remote mobile development crew that is tailored to your platform requirements. We have experience and years of expertise with all of the popular services, and we can design native apps, cross-platform apps, or Responsive Web Apps, depending on your needs. You can hire React Native app developers or avail of Flutter app development services from us.  To get started customizing your remote mobile development team, contact us directly.

Although it may be challenging to achieve all of your goals using Xamarin, you will ultimately succeed.  Many applications will work with Xamarin, and however, if your venture is long-term, you’ll benefit more from the cross-platform approach. React Native is ideal for MVPs and projects that require a lot of interaction. However, if you expect it to be laden with performance-hungry features, we’d advise skipping it in 2021. Flutter appears to be a useful development for tech aficionados but should be approached cautiously by startups. Nevertheless, if your current tech architecture no longer meets your objectives, and you’re willing to invest in transferring your project to technological advances for better scaling and faster growth. In that case, we think it’s a viable alternative.

Cross-platform mobile app development frameworks are indeed based on your needs and how you want to use the app. If you don’t know what you’re doing, you can Hire Flutter app developers or hire React Native Development services for your project demands. You can also hire Cross-platform App Developers who can aid you with deciding on the best option.

FAQ on Flutter Vs React Native Vs Xamarin

The former is written in the Dart programming language and has been developed by Google. In comparison, Facebook is in charge of the latter based on JavaScript. Both frameworks are open-source and allow contributions from the community.

This is unlikely given the high quality and quantity of React Native apps. Flutter’s future will undoubtedly prosper in the Google community; therefore, neither framework will fall behind the Flutter vs React Native competition.

Is React Native superior to Flutter in general?

In terms of reliability, features, and portability, Flutter is superior. React Native’s popularity, on the other hand, makes it a viable market competitor because its programmers are easier to come by.

Who is the owner of Xamarin?