How to Convert an Android App to iOS Or Vice Versa: Steps Guide

When developing a mobile application, selecting an OS might be confusing as both platforms have their pros and cons. Some key differences exist between Android and iOS platforms. For instance, a majority of smartphone users prefer Android over iOS…

When developing a mobile application, selecting an OS might be confusing as both platforms have their pros and cons. Some key differences exist between Android and iOS platforms. For instance, a majority of smartphone users prefer Android over iOS. Similarly, there are many apps that later became available for the Android platform.

It is worth mentioning here that iOS-based devices can block third-party app stores. On the contrary, Android doesn’t have this feature. Nowadays, iOS app development is becoming popular because of the popularity of iOS-based apps. Android is an open-source model, whereas iOS is closed with open source components.

Reasons To Convert An Android App To iOS Or Vice Versa

The primary reason behind converting an Android app to iOS and vice-versa is to seize the market opportunity. In simple words, the reason to convert an app is to expand your market base. Converting an iOS app into Android and vice-versa also helps you to develop new markets. New and unexplored markets imply more users and shares.

Another reason for converting an Android app into iOS and vice-versa is to harness the new software capabilities. With the help of Android app development services, you would be able to add or remove features based on the preferences of your users.

There exists another reason why should convert an Android app into iOS and vice-versa. Boosting profits in the new market domain is one of the main objectives of marketers. By porting an app, they would be able to capture the attention of the newer type of audience.

App porting is also associated with entering an entire brand ecosystem. If you want your Android app to reach iOS users, then porting is the best way forward. In simple words, porting an app to a respective OS is all about capturing market potential and gaining exposure.

There are various things you should consider before converting an Android app into iOS and vice-versa. They are as follows:

Selection of a Proper Programming Language

As the fundamental Android app development language, Kotlin is usually recommended by Google. This is because it facilitates the smoothest and fastest rework of Android elements. Kotlin comes equipped with complete backward compatibility with Java. Moreover, you have to work with Swift, a programming language developed by Apple, to finalize the porting of the app.

When compared to the Android OS, all iPhone smartphones and devices rely on a single iOS. As soon as a new version is released, all the devices compatible with it are updated simultaneously. Hence, the best option is to opt for the stable iOS version for a smooth transition.

Prepare for the Redesign Project

While a specific part of the design can be reused, many minor and major elements usually undergo change. In simple words, you should outline the differences between flat and material design guidelines.

Also Read : Why Golang is a better choice for your upcoming Web project?

Why Should You Port Android To iOS App For Your Business Growth?

Advantages Of Converting For The Business Owner

No doubt, cross-platform mobile app development is gaining increasing popularity among a large number of masses. As stated earlier, the main benefit of converting an Android app into iOS and vice-versa is to capture new market territories. For instance, in a particular area, if people prefer iOS apps, then you cannot market your brand with an Android app.

Though you can go for separate iOS app development, it is much easier to port an app into iOS from Android. If you want to expand your customer base and develop new markets, opting for app porting is the best bet.

The most annoying thing about Android is the existence of a large number of versions of the OS. New versions tend to come out every month. In other words, it is quite difficult to stay updated with the changes. Features available in one version may not be available in another version. To solve this issue, you need to draw a line between the newer and older versions of the OS.

To be precise, there are always some rules and frameworks for mobile app development. You have to assess the compatibility of these tools before transforming an Android app into an iOS app and vice-versa. If they are not compatible, you should recognize the proper alternatives. It would be great if both the platforms were based on Objective-C.

In the process of converting an Android app into iOS and vice-versa, another challenge is testing. The total number of tests you will need to run depends completely on the Android devices. And if you are familiar with testing Android apps, then at first, it might be a challenge to test iOS apps.

How Much Does It Cost To Port An Android App To iOS?

That’s why it is advisable to contact a reputed mobile app developer who will help you to be aware of the costs of converting an app.

Step-by-Step Process: How To Convert An Android App To iOS Or Vice Versa

For converting an Android app into iOS and vice-versa, you have to follow a step-by-step guide. Here are the steps which you need to follow. 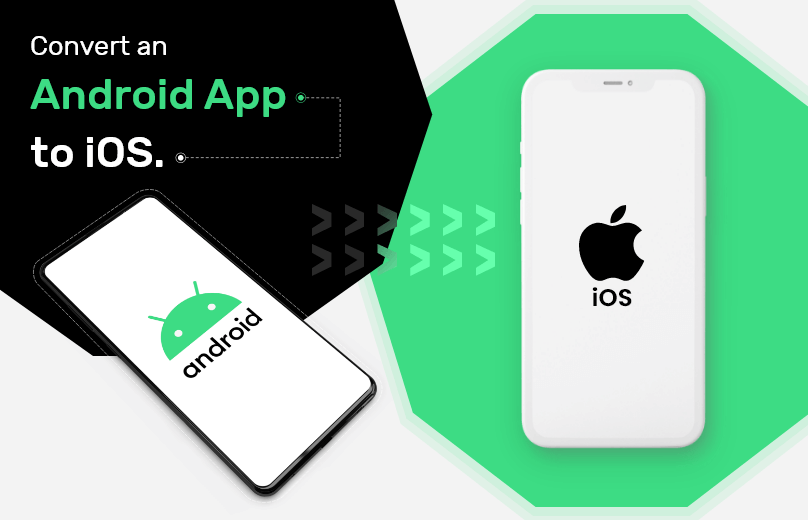 Assess the Business and Technical Requirements

In simple words, you should first analyze your objectives and see whether these goals align with app conversion. It would be best if you also analyzed the compatibility specifics with the iOS platform along with third-party modules.

Numerous essential design elements of the existing Android application will need to be revised and changed in accordance with the Flat Design guidelines. The Android-native UI mirroring feature and prior design segmentation into assets are important features. The design for app porting should be a separate patch of project workflow.

Rephrase the Code and reset the Overall Architecture

Because the Android app code cannot be recompiled to fit the iOS architecture requirements, you will need to recode the majority of the software. The most important thing here is to keep all the compatibility and sync every step of the process with new platform requirements.

After converting an app from Android to iOS, you must thoroughly test all of the functional UI/UX features and other operational capabilities of the converted app during the finalisation stages. In addition, some additional Quality Assurance effort is required to ensure the app’s field use quality. 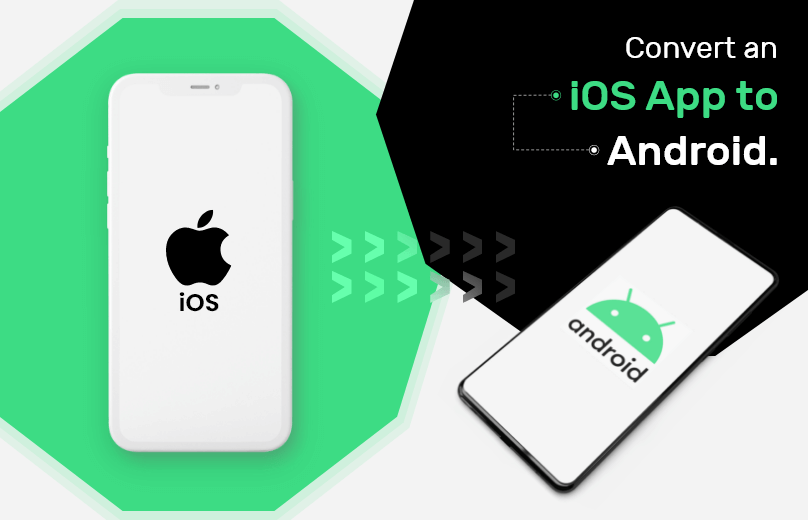 How Much Does It Cost To Convert An Android App To An iOS App, Or The Other Way Around?

Here are some of the factors which determine the cost of converting an Android app into iOS and vice-versa.

How Can MultiQoS Help In Porting Android Apps To iOS Or Vice Versa?

At MultiQoS, we are the experts of cross-platform mobile application development. Our developers can either help you convert or port an Android or iOS app. When the context is about mobile app development, we always follow a highly transparent process.

Also Read: How to Build Security into Your Next Mobile App?

In other words, we keep our clients in the loop while facilitating important decisions. If you have a mobile app idea in your mind, contact us at the earliest. We will assist you in making your vision a reality.

So as you can see, there are various benefits associated with app conversion and porting. Contact a reliable mobile app developer and get the best out of your requirements. If you need assistance porting your app to one of the operating systems or have any questions, feel free to contact us. We’d be delighted to assist you!

Why Golang is best language for AI-Powered App Development and How is it better than Python?